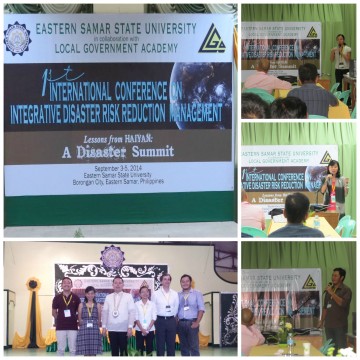 With the theme “Lessons from Haiyan: A Disaster Summit,” the conference gathered almost 350 delegates from different national government agencies (NGAs), local government units (LGUs), non-government organizations (NGOs), and from the education sector to discuss experiences from the impacts of Typhoon Yolanda (Haiyan) to cite good practices in terms of preparation and implementation of disaster risk reduction strategies to reduce human and natural casualties.

The conference also included paper presentations under the themes of the disaster risk reduction and management—Prevention and Mitigation, Disaster Preparedness, Disaster Response and Rehabilitation and Recovery. Three papers from the OML Center Special Project Yolanda (SP Yolanda) team were presented. These papers were deduced from the key results of the Evidence-based Rehabilitation Study in the Yolanda-affected Areas.

The first paper, entitled Integrating Vulnerability Assessment into Land Use Planning: Case Studies in Selected Yolanda-Affected Areas, was presented by Ms. Justine Orduña co-authored by Mr. Luigi Toda and Mr. Carlos Tito Santos from the Vulnerability Assessment Component of SP Yolanda. It was based from the initial findings of the vulnerability assessment undertaken in the Cities of Tacloban and Ormoc and in the Municipalities of Palo and Kananga in Leyte. The study identified land use issues specific to settlements such as the conflicting “no build zone” policy from the Water Code and the Office of the Presidential Assistant for Rehabilitation and Recovery (OPARR) guidelines, “safe, unsafe and no-dwelling zones.”  It has been a challenge to the LGUs to address these issues since a significant percentage of the population affected by Typhoon Yolanda is residing within those zones, making the vulnerability of these people higher as they are more exposed to disaster risk.

Another paper from Ms. Rafaela Jane Delfino was Do Ecosystems Matter in Disaster Risk Reduction? A Closer Look at Mangroves and Coastal Protection in Yolanda-Affected Areas. It was a perception study on the protective function of the mangroves in Tacloban City, Palo, Ormoc City in Leyte and in General MacArthur and Quinapondan in Eastern Samar. The study correlated the socio-economic conditions to: 1) awareness on the role of vegetation in coastal protection against sea waves and storm surge; and 2) participation of the communities along the coastlines of the study sites in coastal protection. The presentation emphasized the need to educate and engage the local stakeholders on mangroves as these mangroves have a role in reducing disaster risk in the areas where they are located.

To supplement the previous paper, Mr. Carlo Carlos presented Comparison of Resiliency and Protective Function of Rhizophora, Sonneratia, and Avicennia spp: Implications on Mangrove Rehabilitation Practices. The paper discussed the fast recovering mangrove species throughout the existing mangrove stands to compare the vegetation resistance of dominant mangrove genus stands namely Rhizophora, Sonneratia and Avicennia. Among the findings is the direct proportional relationship between height and diameter at breast height (DBH) to the vegetation resistance. As for mangrove management in relation to rehabilitation, correct planting suitability and careful planning must be observed.

Research Fellow Carlos Tito Santos was among the impressionists of the closing ceremony of the second day. On the third and last day of the conference, the participants visited the Municipalities of Balangkayan, Hernani, Salcedo and Guiuan, to see the extent of damage of Typhoon Yolanda (Haiyan), also to learn how these areas in Eastern Samar recovered so far.

The Summit was able to establish an ad hoc committee for disaster management with one representative from each identified cluster:  Metro Manila, Luzon, Visayas and Mindanao. According to ESSU President Edmundo Campoto, this is to forge a partnership through networking between the affected local communities and the national and international humanitarian organizations in creating opportunities and valuable resources in disaster management.