Commentary: “How do we finance nature conservation?” 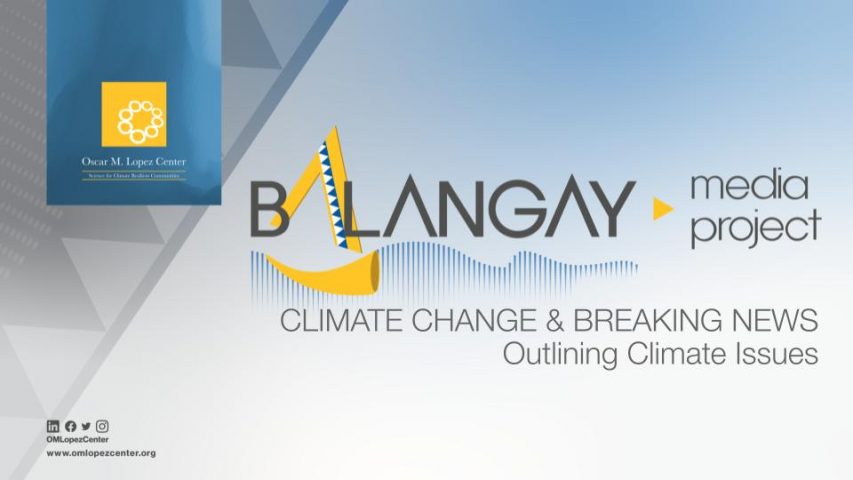 The OML Center announced Umalohokan Fellows to the Climate Media Labs, as well as seed fund grantees, during the “Climate Change and Breaking News: Outlining Climate Issues” webinar last August 5, 2021 via Zoom. The fellowship and grants are part of the Center’s Balangay Media Project.

Launched in June 2021, the Balangay Media Project aims to engage passionate communicators to steer public discourse on climate change and inspire action. Of the applications received by the Center, ten teams composed of representatives from media, academe, non-profit, and youth sectors were selected to move onto the Umalohokan Fellowship to the Climate Media Labs.

OML Center’s Communications Manager Ms. Kato Sarmiento, explained that submissions underwent and passed eligibility review based on team composition, including diversity of membership, and commitment to or passion for the issue or cause. Ms. Sarmiento added that as Umalohokan Fellows, the teams are qualified to participate in the Climate Media Labs, a specialized training program designed to help teams build on their pitches and campaigns to be held for six weeks. The labs are tentatively scheduled to start in the last week of August.

The ten teams participating in the labs are composed of:

The “Climate Change and Breaking News: Outlining Climate Issues” was part of the capacity-building components of the Balangay Media Project, and was designed to provide an overview of the climate issue and bring participants to a comparable level of proficiency, featuring discussions on climate change concepts and discourse.

Dr. Gerry Bagtasa, a long-time collaborator of the Center and an associate professor at the Institute of Environmental Science and Meteorology in the University of the Philippines Diliman, provided a technical perspective on climate change, explaining fundamental concepts.

Ms. Mia Gaviola, chief operating officer of The Nerve, a data forensics consultancy based in the Philippines, shared highlights of the climate change discourse mapping which was commissioned by the Center in 2018.

Ms. Andrea Almonte, OML Center grants officer, announced the eight teams that qualified for the seed grant of PHP35,000. To determine grantees, teams accepted to the Climate Media Labs were further assessed based on strength of climate lens, innovation and creativity of approach, feasibility of success, and pitch impact.

Ms. Almonte added that all ten teams are still eligible for the next tranche of the grant, where five awardees will be selected based on campaign plans. The second grant awarding will take place at the end of the Climate Media Labs after the submission of full campaigns.