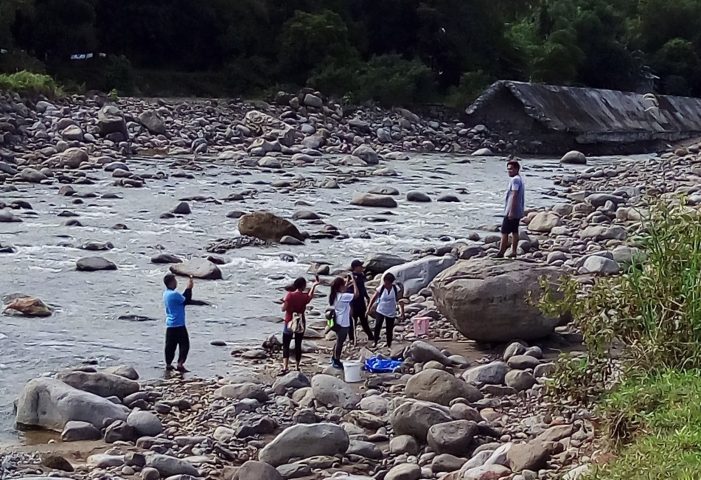 A warming planet will mean more frequent heavy rains and intense typhoons in the Philippines, causing many streams to overflow their banks and transform into danger zones. With many Filipinos living or working along river banks, heavy downpours could bring more death and destruction to riverside communities.

Silliman University, with the support of the Oscar M. Lopez Center, took the interdisciplinary approach of bringing together social scientists, chemists, biologists, geologists, engineers, and computer scientists to create tools to reduce disaster risks along rivers. The tools were applied to the Ocoy River which meanders through 17 barangays in Valencia, Sibulan, and Dumaguete City in Negros Oriental. The flooding around the Ocoy River during Typhoon Sendong led to more than two dozen deaths in 2011.

Work began by identifying the locations of human settlements, farms, businesses, and vulnerable structures along the 20-kilometer Ocoy River, from the headwaters in mountainous terrain and the middle reaches to heavily populated areas downstream and the river’s mouth emptying into the Tañon Straits. Each team used its available scientific tools to study the people and their surroundings—both the natural and built environment in and around the river.

Survey questionnaires developed by social scientists revealed how households and business owners perceived risks. The surveys also provided insight into the sense of place, a multi-faceted concept that links people to the river. Among the key dimensions of sense of place are a person’s attachment to, dependence on, and identity with a place. The data showed that people had a strong sense of place despite the perception of high risk, reflected in the 22% of people unwilling to relocate compared to 41% open to relocating to safer areas and 37% who might relocate if specific conditions were met.

Biologists and chemists looked at characteristics of the river itself, including its depth, velocity, pollution levels, the dominant vegetation and land use in and within 500 meters of the riverbanks at different locations and seasons of the year. Many fish and shellfish, a source of food for residents upstream, could no longer be found midstream. High levels of coliform (bacteria associated with environmental contamination from feces) during certain times of the year indicated the potential danger of spreading disease-causing germs into people’s homes and farmlands during a flood.

Geologists and engineers looked at the changes in elevation, the bridges and spillways, embankments, PAGASA rainfall data going back to the 1950s, and historical impacts of past floods as confirmed by social scientists. Computer models were used to understand and predict how much surface water to expect for different amounts of rain and how the water would flow thus determining which areas would be flooded. The shape of the river and types of existing embankments coupled with predictions of the amount and velocity of the water were used to identify the most vulnerable areas. Photos confirmed where grouted riprap frequently collapsed after heavy rains.

Throughout the project, data from the different teams were linked by the computer science team through an online database, geographic information system (GIS), and visualization tools that overlaid social, chemical-biological, and geophysical data on maps of the river basin. This process encouraged interactions and created synergy between the teams. Recognizing that most local government units have limited financial resources to conduct these studies, the teams gave preference to existing free or low-cost software and tools. For example, instead of expensive aerial drones and LiDAR, the geophysical team used a low-cost digital terrain model from NAMRIA supplemented with reconnaissance photos and Google Earth images to determine ground cover, a laser measurement device used in construction and an inexpensive echo sounder used by fishers to measure the depth of the river. The computer science team used the free open-source software QGIS and trained LGU staff on its use.

The culmination of the work were four sets of recommendations, one for each municipality/city and one for the province. Many recommendations related to existing or developing local disaster risk reduction management plans and climate change adaptation plans, including hard flood control structures (such as concrete revetments in vulnerable concave banks, flood detention basins, and flood-diverting “green rivers”) as well as non-structural measures ranging from crucial forest and watershed protection to the planting of bamboo-vetiver-kakawate along banks for flood control. Policy recommendations included enforcement of no-build zones, planting of vegetation for flood retention in easement areas, wastewater treatment to reduce pollution of the river, budgets for essential search-and-rescue equipment, and resettlement of residents in high hazard areas to relocation sites that meet conditions identified by the social surveys as a form of adaptive resettlement.

The recommendations also addressed various concerns raised by households and business owners during many stakeholder consultations. Emphasis was given to public awareness and preparedness measures for households and businesses, with training provided to LGU communications officers. Barangay tanods, health workers and purok leaders were trained in first aid and basic life support to promote self-protection and self-help at a time of disaster. Other recommendations dealt with evacuation plans, proper siting and provisioning of evacuation centers, plans for protection from looting after evacuations, protection of animals and crops, and recovery and rehabilitation programs.

Using data from the other teams, the computer science team created a web portal incorporating visualization tools with GIS-based maps, and a mobile app for disaster awareness information, flood early warning, and incident reporting. The system called “Siren” runs on Android and IOS mobile phones and would help the Provincial Disaster Risk Reduction and Management Council respond to disasters more effectively while keeping first responders and the public informed during a disaster.

The work shows the value of an interdisciplinary approach and translating research results to concrete actions that could markedly reduce the loss of life and property as riverside communities along the Ocoy River face increasing risks in coming years. The low-cost tools can be used by other LGUs to adapt to their needs as they seek to protect their riverside communities from the harsh reality of climate change.

Visit the OML Resilience Grant page on “A Spatio-Temporal Analysis of Settlement Behavior and Resiliency of Households and Businesses along a River” for additional information. You can also read about the project via Silliman University’s website.