QUIZ: Two Truths and a Lie: Impacts of Climate Change on Forests 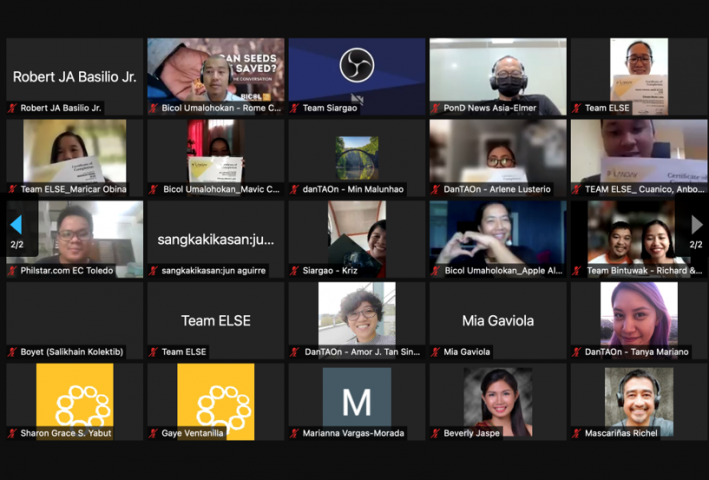 The OML Center named the five teams who will be receiving PHP70,000 each as part of the second tranche of the Balangay Media Project Umalohokan Grant during the Climate Media Labs’ culminating event last October 26, 2021.

Launched in June 2021, the Balangay Media Project aims to engage passionate communicators to increase science-based public discourse on climate change and inspire action. Ten teams composed of representatives from media, academe, non-profit, and youth sectors were selected to move onto the Umalohokan Fellowship to the Climate Media Labs, a series of webinars organized to enhance science-based media coverage.

The recipients of the second tranche of the Umalohokan Implementation Grants are:

Made up of artists, the group is based in Quezon City with some members residing in Baguio City, Angeles City, and Dingalan, Aurora.

Its campaign, “Sampung Sanga-sangang Kuwentong Klima ng mga Pulo” intends to produce ten three-minute short videos to help include small island communities in the conversation about climate change, highlighting the resilience and vulnerability of Sulu-an island in Guiuan, Eastern Samar, where typhoon Haiyan made its very first landfall in 2013.

This team of online journalists seeks to run a solutions-driven information campaign via “New ways for Nueva Ecija: Climate adaptation in the ‘Rice Bowl’ of the Philippines” to promote new technologies and climate-resilient methods to farmers in Nueva Ecija, the Philippines’ “rice granary”.

Based in the Bicol region, the team endeavors to increase awareness about the practice of saving seeds, one of several components of sustainable food production and consumption, and support farmers’ groups that practice agroecology via their campaign “SDG [Sustainable Development Goal] 12 Now!”. The group also aims to spread knowledge about seed-saving, show how local government units can support it, and strengthen the role of humanitarian organizations in scaling up such practice.

Through its campaign “Dantaon: Our Climate Stories 100 years from now”, the team intends to document several narratives from a small island community in Guiuan, Eastern Samar,  a lakeshore community in Taytay, Rizal, a resettlement site in Rodriguez, Rizal, an urban coastal community in Navatoas, and the coastal and lowland communities in Zamboanga del Sur. In doing so, the team hopes to amplify the voices of the vulnerable sectors of the country and humanize climate data.

Nine of the ten teams participating in the Balangay Media Project submitted their media blitz campaign plans as part of the requirements to qualify for the second tranche of the Umalohokan Grant.

Named after the town criers who disseminated news in communities in pre-colonial Philippines, the Umalohokan Grant is intended to help the teams fully implement their campaign and communications research plans. The team that most creatively and successfully executes their blitz campaigns and research projects on the most relevant climate issue of their community will ultimately receive a final grant of P150,000.

All the Umalohokan Fellows, including Teams Sangkalikasan, Siargao, ELSE, and PonD News Asia, were given certificates for completing the Climate Media Labs during the culminating event.

The Labs, which featured local and international resource persons who discussed climate science, climate change communication, and strategies, among others, were held twice a week from late August until early October. Climate Tracker, together with TheNerve, are the Center’s implementing partners for the Labs, in collaboration with EB Impact, the Yale Program on Climate Change Communication, Pumapodcast, Association of Young Environmental Journalists, and Climate Central.

Visit the Balangay Media Project page on our website to learn more about it and to read updates.