Commentary: “Of COPs and cop-outs” 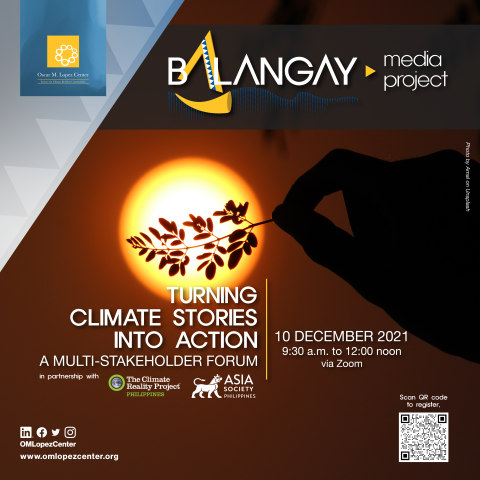 The Oscar M. Lopez Center, in partnership with The Climate Reality Project Philippines and Asia Society Philippines, will be holding Turning Climate Stories Into Action, a multi-stakeholder forum on December 10, 2021 (Friday), from 9:30 am to 12:00 nn via Zoom.

This event aims to engage stakeholders in a discussion on various approaches to climate storytelling and reporting employed by select Balangay Media Project Umalohokan Fellows, and how these can be utilized to enable action.

The two-part forum will feature a roundtable discussion, where the Umalohokan Fellows will present their different media campaign strategies; and a solutions brainstorming session, where the Fellows and forum participants shall be assigned to breakout rooms to identify challenges and opportunities of and in climate reporting.

Campaigns to be featured in the forum are:

“New ways for Nueva Ecija: Climate adaptation in the ‘Rice Bowl’ of the Philippines” by Philstar.com G-Unit composed of Gaea Katreena Cabico, Jonathan de Santos, and Efigenio Toledo IV. The group endeavors to promote new technologies and climate-resilient methods to farmers in the province of Nueva Ecija via traditional climate reporting.

“SDG 12 Now!” by Bicol Umalohokan, which is composed of Mavic Conde, Rome Candaza, and Apple Allison Perez. The team worked on increasing awareness about the practice of saving seeds, one of several components of sustainable food production and consumption, and support farmers’ groups that practice agroecology via solutions journalism.

“Protection and Preservation of University of the Philippines Arboretum” by PonD News Asia, which is composed of Elmer Nev Valenzuela, Joel Mataro, Richel Mascariñas, and Demi Jhoe Mabansay. With an investigative journalism approach, the team shines a spotlight on the UP Arboretum to make its inhabitants understand the importance of its ecosystem services and impact on climate issues, and for them to take serious efforts in its conservation and protection.

“Kinaya it Kailayahan: The Role of Indigenous Knowledge Systems (IKSP) and Practices of Nabaoynons in Malay, Aklan in developing local climate change resiliency”, by Team Binutak, which is composed of Ronald Maliao, Beverly Jaspe, and Richard & Ritchell Cahilig. Via ethnographic storytelling, the group worked on enhancing the public’s understanding of the IKSP in riverine conservation and facilitating the development of local adaptive mechanisms for climate change resiliency.

Launched in June 2021, the Balangay Media Project aims to engage passionate communicators to increase science-based public discourse on climate change and inspire action. Ten teams composed of representatives from media, academe, non-profit, and youth sectors were selected to move onto the Umalohokan Fellowship to the Climate Media Labs, a series of webinars organized to enhance science-based media coverage.

Click here to register for the multi-stakeholder forum. You may also visit the Balangay Media Project page on our website for more information.