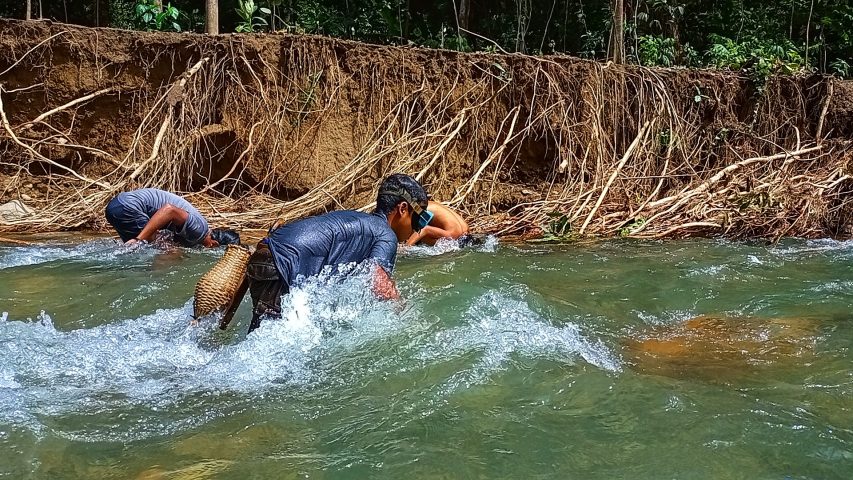 "Panglinte" is a fishing activity practiced by the people of Brgy. Nabaoy, Malay, Aklan. They use goggles, locally-made spear known to locals as "baslay" (for short-range) and "apok-apok" (for long-range), and a small trap for their catch tied to their waists which they call "baean-an/b'ean-an". Photo by Richard R. Cahilig.

A group of environmental advocates and researchers received a cash grant from the Oscar M. Lopez Center, helping them emphasize the importance of preserving the knowledge and tradition of the Nabaoynon Indigenous communities in Madalag, Aklan via ethnographic storytelling.

Team Bintuwak, composed of Ronald Maliao, Beverly Jaspe, and Richard & Ritchell Cahilig, received PhP 70,000 as part of the second tranche of the OML Center’s Umalohokan Grant, which is part of the Balangay Media Project.

Named after town criers who spread the news in pre-colonial Philippines, the grant is expected to help Team Bintuwak and four other awardees to fully implement their campaigns and communications research plans. The team that most creatively and successfully executes their blitz campaigns and research projects on the most relevant issue of their community will ultimately receive a final grant of P150,000.

Through the “Kinaiya it Kailayahan: The Role of Indigenous Knowledge Systems and Practices (IKSP) of Nabaoynons in Malay, Aklan in Developing Local Climate Change Resiliency”, team Bintuwak worked on enhancing the public’s understanding of the IKSP in riverine conservation and facilitated the development of local adaptive mechanisms for climate change resiliency.

In its campaign plan, the group envisions that the IKSP of Nabaoynons and the local community will be tapped as a critical component and partner in local policymaking, particularly in the context of riverine conservation. The group also endeavors to “bridge, co-produce, and preserve the knowledge that is suited to enhance local climatic adaptation.”

Aside from documentation of local stories of Nabaoynons amid climate change realities, the team also mounted a cultural show which featured “local performing arts and artworks, display of fishing tools, local produce, indigenous cuisines, native handicrafts, souvenirs, and other IKSP exhibits,” the group explained on their Facebook page.

The other four Umalohokan grantees are Team Bicol Umalohokan which focused on sustainable food production and consumption practices; Team Philstar.com G-Unit, which will help promote new, climate-resilient farming methods; Team DanTAOn, which plans to amplify the voices of communities most vulnerable to climate change; and Salikhain Kolektib, which told the stories of residents living in small island communities via short videos.

All five Umalohokan grantees belong to a larger group of ten teams whose members have all been given Umalohokan Fellowships. The Fellowships entitled teams to participate in the Climate Media Labs, a six-week learning program that sharpened their knowledge about the basics of climate science, climate change communications, among others.

Developed with Climate Tracker and TheNerve, scientists and experts who delivered lectures for the Labs included Ms. Lourdes Tibig, the lead author of an Intergovernmental Panel on Climate Change (IPCC) Special Report on the Ocean and Cryosphere in a Changing Climate; Dr. Ma. Laurice Jamero, a contributing author of the recently released Working Group I report to the Sixth Assessment Report of the IPCC; and Dr. Anthony Leiserowitz, the founder and Director of the Yale Program on Climate Change Communication.

All the Umalohokan Fellows were given certificates for completing the Climate Media Labs.

Register here for the multi-stakeholder forum on December 10, 2021. Visit the Balangay Media Project page on our website to learn more.