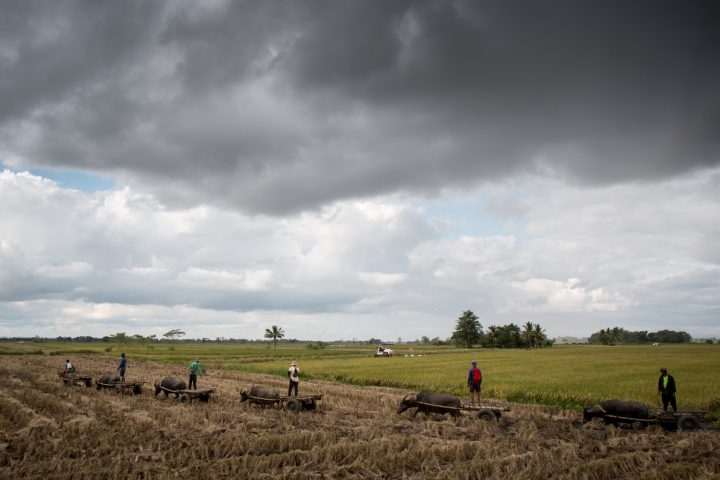 In this October 2018 photo, Farmers in Isabela are seen gathering their rice and getting them ready for processing. Just a few weeks before this, the Philippines was pummeled by Typhoon Ompong which caused P26-billion worth of damage to the agriculture sector. Photo from Philstar.com G Unit.

A group of online journalists received a cash grant from the Climate Media Labs, allowing them to document how farmers are using new methods to protect their crops from extreme weather events.

Named after the town criers who spread news in pre-colonial Philippines, the grant is expected to help Team Philstar.com G-Unit and four other awardees to fully implement their campaigns and communications research plans. The team that most creatively and successfully executes their blitz campaigns and research projects on the most relevant issue of their community will ultimately receive a final grant of PhP150,000.

The team seeks to “run a solutions-driven information campaign” that will help promote new climate-resilient methods of farming, its campaign plan said.

The group, whose members work for a news website its team is named after, will focus on rice farmers in Nueva Ecija province, the Philippines’ largest producer of the grain.

After running the information campaign, the team will also “highlight how climate change will jeopardize the economy and food security,” its plan said.

To this end, the team of Cabico, de Santos, and Toledo will produce multimedia stories, videos, and podcasts which will help explain how farmers can benefit from “climate resilient technologies and practices.”

Team Philstar.com G-Unit is one of five teams across the Philippines that were awarded the Umalohokan Implementation Grant.

Other four teams are Bicol Umalohokan, which focused on sustainable food production and consumption practices; Salikhain Kolektib, which told the stories of residents living in small island communities; DanTAOn, which plans to amplify the voices of communities most vulnerable to climate change; and Bintuwak, which emphasized the importance of preserving the knowledge and tradition of the Nabaoynon Indigenous communities in Madalag, Aklan.

All five Umalohokan grantees belong to a larger group of ten teams whose members have all been given Umalohokan Fellowships.

To apply for fellowships, each team had to submit a media campaign plan that intends to raise awareness of underreported or untold climate stories in their communities.

After being awarded Umalohokan fellowships, members of all ten teams were entitled to attend the Climate Media Labs, a six-week learning program that sharpened their knowledge about the basics of climate science, climate change communications, among others.

Held from August to October, the Climate Media Labs were held for two hours per session twice a week from late August until early October.

The Labs, which were developed together with Climate Tracker and TheNerve, were also attended by local and foreign climate scientists and communicators.

Scientists and experts who delivered lectures for the Labs included Ms. Lourdes Tibig, the lead author of an Intergovernmental Panel on Climate Change (IPCC) Special Report on the Ocean and Cryosphere in a Changing Climate; Dr. Ma. Laurice Jamero, a contributing author of the recently released Working Group I report to the Sixth Assessment Report of the IPCC; and Dr. Anthony Leiserowitz, the founder and Director of the Yale Program on Climate Change Communication.

All the Umalohokan Fellows, including Teams Sangkalikasan, Team Siargao, ELSE, and PonD News Asia, were given certificates for completing the Climate Media Labs.

Register here for the multi-stakeholder forum on December 10, 2021. Visit the Balangay Media Project page on our website to learn more.