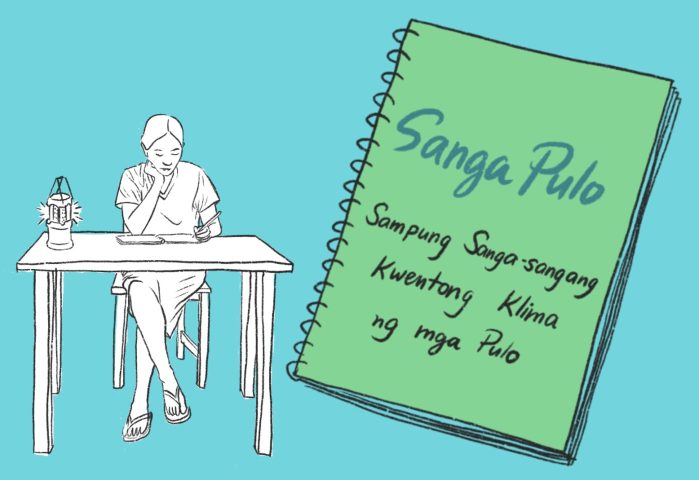 This fictional story revolves around Tala, who is deciding whether to leave her home island to go to college, or stay and help her parents. She created a 10-day journal to help her decide, and through this, she learned about herself, her home island, and climate change. The story is written by Salikhain Kolektib based on research, media publications, and interviews from their friends from Sulu-an Island, Guiuan, Eastern Samar, and is supported by the OML Center through its Balangay Media Project. You may also visit Salikhain Kolektib’s YouTube page. Image from Salikhain Kolektib.

An artist’s collective in Quezon City has produced short videos based on stories of people who live on small islands that are threatened by rising sea levels.

This was after Salikhain Kolektib received a PhP70,000 Umalohokan Grant from the Climate Media Labs, allowing the group to produce ten videos about the possible effects of climate change on small island communities.

Named after town criers who spread the news in pre-colonial Philippines, the grant is expected to help Salikhain Kolektib and four other awardees to fully implement their campaigns and communications research plans. The team that most creatively and successfully executes their blitz campaigns and research projects on the most relevant issue of their community will ultimately receive a final grant of PhP150,000.

Salikhain Kolektib’s “Sanga Pulo: Ten Speculative Climate Stories of Small Island Communities” utilized storytelling “as a device to concretize and imagine data from actual scientific research through scenario building,” the group said. “By understanding the experiences of people living on island communities and how they might be affected by climate change, we could determine who the most vulnerable people in this sector are and based the characters and the plot from that.”

By “interweaving” stories of the characters in each of the episodes, the videos emphasized significant vulnerabilities of small islands. These include “resource limitations, mainland dependence, lack of access to markets and technology, lack of alternative sustainable livelihoods complementing farming and fishing, direct exposure to climate-related hazards, lack of disaster risk assessment, and isolation during disasters,” said the group.

Besides short videos, the group also produced “a printable PDF education guide for each episode” for the education sector, “particularly for senior high school teachers teaching disaster risk reduction and management and climate change adaptation in their classes.”

“Through this project, we hope to bring focus to one of the most marginalized and vulnerable sectors to climate change. By doing this, we hope to highlight the gravity of the problem by showing real and dire possibilities that will happen in the future but are also already being felt in the present,” the group said. Visit Salikhain Kolektib’s YouTube page to watch the videos.

Other four Umalohokan grantees are Team Bicol Umalohokan which focused on sustainable food production and consumption practices; Team Philstar.com G-Unit, which will help promote new, climate-resilient farming methods; Team DanTAOn, which plans to amplify the voices of communities most vulnerable to climate change; and, Team Bintuwak, which emphasized the importance of preserving the knowledge and tradition of the Nabaoynon indigenous communities in Malay, Aklan.

All five Umalohokan grantees belong to a larger group of ten teams whose members have all been given Umalohokan Fellowships. The Fellowships entitled teams to participate in the Climate Media Labs, a six-week learning program that sharpened their knowledge about the basics of climate science, climate change communications, among others.

Developed with Climate Tracker and TheNeve, scientists and experts who delivered lectures for the Labs included Ms. Lourdes Tibig, the lead author of an Intergovernmental Panel on Climate Change (IPCC) Special Report on the Ocean and Cryosphere in a Changing Climate; Dr. Ma. Laurice Jamero, a contributing author of the recently released Working Group I report to the Sixth Assessment Report of the IPCC; and Dr. Anthony Leiserowitz, the founder and Director of the Yale Program on Climate Change Communication.

All the Umalohokan Fellows were given certificates for completing the Climate Media Labs.

Register here for the multi-stakeholder forum on December 10, 2021.