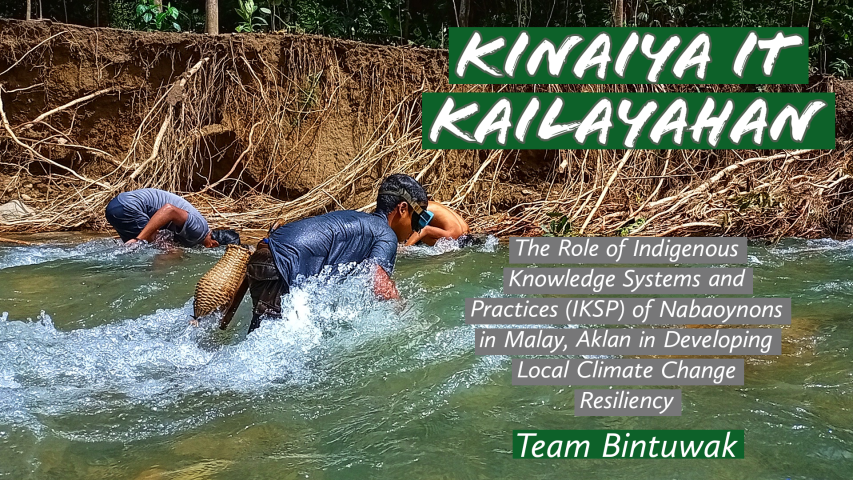 A group of environmental advocates and researchers with a media blitz campaign underscoring the importance of Indigenous Knowledge Systems and Practices (IKSP) in local climate resiliency received the final grant from the Balangay Media Project during the “Turning Climate Stories Into Action” multi-stakeholder forum held via Zoom on Friday, December 10, 2021.

The forum was organized, in partnership with The Climate Reality Project Philippines and Asia Society Philippines, to raise awareness on certain climate themes and issues and to identify opportunities and key challenges to climate reporting and storytelling towards exploring key actions and next steps.

Team Bintuwak, composed of Ronald Maliao, Beverly Jaspe, and Richard & Ritchel Cahilig, was awarded PhP170,000 for their campaign “Kinaiya it Kailayahan: The Role of Indigenous Knowledge Systems and Practices of Nabaoynons in Malay, Aklan in Developing Local Climate Change Resiliency.”

Via ethnographic storytelling, the team worked on enhancing the public’s understanding of the IKSP in riverine conservation and emphasizing the importance of preserving the knowledge and tradition of indigenous communities.

Aside from documentation of local stories, the team also mounted a cultural show which featured local performing arts and artworks, display of fishing tools, local produce, indigenous cuisines, native handicrafts, souvenirs, and other IKSP exhibits. A coffee table book highlighting IKSP and how it is instrumental in building climate resilience was also published by the team.

The multi-stakeholder forum included a roundtable discussion, where select Umalohokan Fellows, including Team Bintuwak, presented their different media campaign strategies. The forum featured the campaigns of Bicol Umalohokan which focused on sustainable food production and consumption practices; G-Unit, which will help promote new, climate-resilient farming methods; Salikhain Kolektib, which told the stories of residents living in small island communities via short videos; and PonD News Asia, which produced a documentary on the UP Arboretum highlighting its benefits and the various issues confronting it.

To provide insights on the campaign strategies of the fellows, the Center invited representatives from the media and the academe: Johannes Chua, editor of Property and Environment sections and sub-editor of the Lifestyle Section of the Manila Bulletin; Jonathan De Santos, news editor of Philstar.com; Luz Rimban, executive director of the Asian Center for Journalism and co-founder of Vera Files; Prof. Flordeliz Abanto, coordinator for Instructional Video & Faculty of the Far Eastern University; and Samantha Bagayas, community and civic engagement specialist for MovePH, Rappler’s civic engagement arm. The panel discussion was moderated by Kristine Galang, communications officer of The Climate Reality Project Philippines.

A solutions brainstorming session followed the discussion where participants identified issues that needed to be prioritized and addressed based on the presentations of the teams.

Launched in June 2021, the Balangay Media Project aims to engage passionate communicators to increase science-based public discourse on climate change and inspire action. Based on their pitches, ten teams composed of representatives from media, academe, non-profit, and youth sectors were selected to move onto the Umalohokan Fellowship to the Climate Media Labs, a series of webinars organized to enhance science-based media coverage.

In October, team Bintuwak and four teams received a grant of PhP70,000 to fully implement their campaign and communication research plans.

To learn more about Team Bintuwak’s campaign, visit the Facebook and YouTube pages of Kinaiya it Kailayahan. You may also visit the Balangay Media Project page on our website for more information.