Commentary: “Methane: The other gas warming the planet” 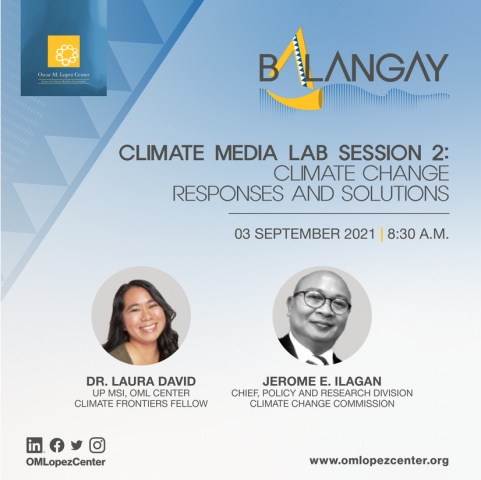 Dr. Laura David, director of the UP Marine Science Institute (UP-MSI) and Mr. Jerome Ilagan, chief of the Policy and Research Division of the Climate Change Commission discussed adaptation and mitigation strategies. The Labs were organized to build the capacity of teams of communicators under the Umalohokan Fellowship on science-based storytelling.

One of the leading oceanographers and multi-awarded female scientists in the country, Dr. David discussed climate hazards and coastal marine habitat distribution in the country, highlighting the sensitivity of fisherfolk and coastal communities to multiple risks. Dr. David shared the tiered community as an integrated adaptation solution, which places critical facilities in low risk zones.

She also highlighted how communicators can be instrumental in drumming up support for restoration initiatives. “Mangrove and seagrass protection can be framed as an investment which secures jobs, provides food for people, and ultimately, saves lives,” Dr. David said. “But there are not enough stories being told about this and that’s where media and communication practitioners can come in”.

Mr. Ilagan, on the other hand, discussed the Nationally Determined Contribution (NDC) of the country to the United Nations Framework Convention on Climate Change (UNFCCC). The NDC outlines the government’s plan to reduce carbon emissions and adapt to the impacts of the changing climate.

He underscored the importance of climate change communication in complementing the efforts of the national government. “Science, policy, and action should be coherent, but we also have to revisit how we communicate climate change and how the government, with all its levels, can be optimized,” Mr. Ilagan said.

The Climate Media Labs are a component of the Balangay Media Project launched by the Center in July this year to engage passionate communicators to steer public discourse on climate change and inspire action. Ten teams composed of representatives from media, academe, non-profit, and youth sectors were selected to move onto the Umalohokan Fellowship to the labs.

In 2020, the OML Center awarded Dr. David the Climate Frontiers Fellowship for Climate Resilience in recognition of her invaluable contributions to the scientific community. She was among the featured resource speakers in the award-winning documentary “Mga Kwento ng Klima”, which the Center co-produced with ABS-CBN DocuCentral to chronicle the effects of climate change and the Filipino experience.

Dr. David was also among the resource speakers of the “Taking Stock: Why Should We Be Concerned About the Climate and Sea Level Changes?” forum last year organized by the Center with the CCC and its National Panel of Technical Experts (CCC-NPTE). The forum featured discussions on the effects of sea level rise on a global and local scale as well as available data, and new techniques. (Read: “Addressing Sea Level Rise: Importance of historical data, projections and local adaptation highlighted by experts during online forum”)

Watch the highlights video of Dr. David during the “Taking Stock: Why Should We Be Concerned About the Climate and Sea Level Changes?” forum on our YouTube channel.