Eleventh Hour: Ph scientists’ call for the next admin to prioritize climate emergency 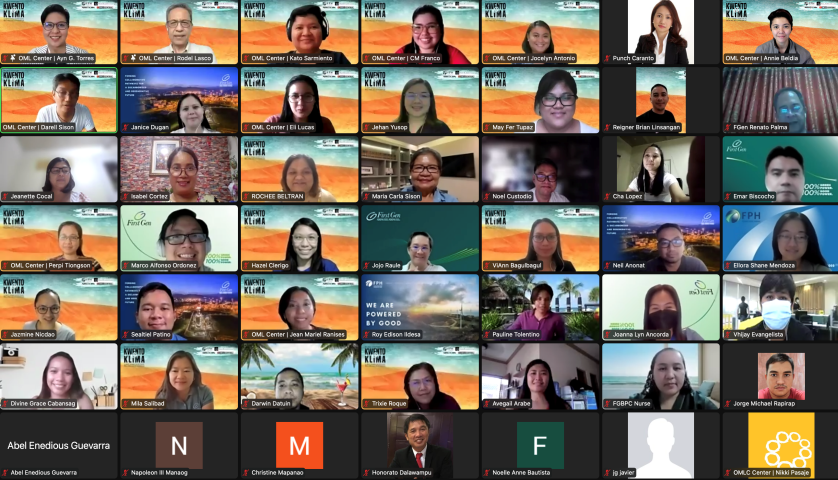 Who does not love stories? Whether it is from a book, a movie, a song, or any other forms of storytelling, stories, especially good ones, are compelling. It is probably why we often use storytelling as a way to convey a message.

During the event, OMLC’s Executive Director, Dr. Rodel D. Lasco, welcomed the attendees and referred to  the Harvard Business School Publishing about why storytelling is such an effective way of conveying a message to a greater public.

“…[stories] build familiarity and trust,” Dr. Lasco said. “…and allow the listener to enter the story where they are, making them more open to learning. Good stories can contain multiple meanings so they’re surprisingly economical in conveying complex ideas, think of climate change, in a way people can grasp,” he continued.

Produced by the OML Center and ABS-CBN DocuCentral in 2019, Mga Kwento ng Klima features first-hand stories of Filipinos and their  awareness and experiences of  climate change impacts.

The documentary features interviews with different stakeholders, including Filipino scientists and climate experts, government officials, as well as survivors of previous Philippine disasters.

For the June 1 program, each featured part of the documentary is followed by a short Kahoot! trivia quiz meant to help further the audiences’ understanding of the climate change issues highlighted by each segment.

“Nilamon ng Tubig” focuses on the challenges that vulnerable communities face in managing rising waters due to sea level rise, extreme rainfall, and floods, among others. Typhoon Ondoy (Ketsana) survivors Rafael Salamat of Paombong, Bulacan and Nenita Pascual of Marikina recount their experiences and share the lessons they learned.

Meanwhile, “Enerhiya at Kalikasan” features efforts in Romblon such as the renewable energy system implemented by the Romblon Electric Cooperative, Inc. (Romelco) and the rain water harvesting units in the island of Cobrador, which has helped the province adapt to the changing climate.

When the Intergovernmental Panel on Climate Change (IPCC) released its Sixth Assessment Report Working Group 2 (AR6 WG2), one of the most glaring messages it had was “there is overwhelming and irrefutable evidence that climate change endangers human wellbeing and the health of our planet, and that any further delay in collective action will result to a missed opportunity of securing an inhabitable future.”

With that said, “Wellness Wednesdays: Climate Stories on Recovery, Resilience, and Regeneration” was but the first event of the Lopez Group of Companies’ month-long celebration of Environmental Month.

The celebration aims to encourage and inspire the companies’ stakeholders, including employees and their families, to take regenerative actions in addressing the climate crisis amidst the  pandemic.

Apart for the Mga Kwento ng Klima virtual event, other activities lined up for the month-long celebration are art workshops featuring Philippine flora, a music festival, an art festival, a virtual amazing race, a simultaneous tree and mangrove planting in different sites such as the La Mesa Watershed, Lagadlarin Mangrove Forest, and First Balfour sites in Sorsogon, Leyte, Albay, Kidapawan, Ilocos, and Batangas, and a “Plant Lovers Weekend” at La Mesa Eco Park.

While some of the events are exclusive to Lopez Group of Companies employees and employees’ families, there are activities such as the Plant Lovers Weekend, the music and art festivals, and the tree and mangrove planting that are open to the public.