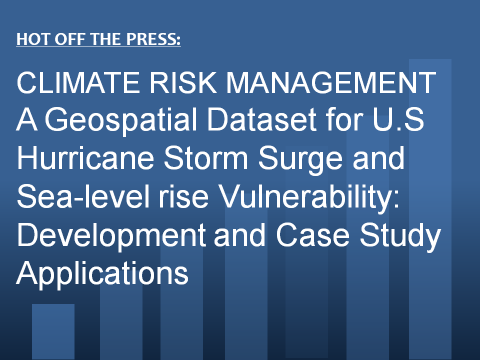 The consequences of future sea-level rise for coastal communities are a priority concern arising from anthropogenic climate change. Here, previously published methods are scaled up in order to undertake a first pass assessment of exposure to hurricane storm surge and sea-level rise for the U.S. Gulf of Mexico and Atlantic coasts. Sea-level rise scenarios ranging from +0.50 to +0.82 m by 2100 increased estimates of the area exposed to inundation by 4–13% and 7–20%, respectively, among different Saffir-Simpson hurricane intensity categories. Potential applications of these hazard layers for vulnerability assessment are demonstrated with two contrasting case studies: potential exposure of current energy infrastructure in the U.S. Southeast and exposure of current and future housing along both the Gulf and Atlantic Coasts. Estimates of the number of Southeast electricity generation facilities potentially exposed to hurricane storm surge ranged from 69 to 291 for category 1 and category 5 storms, respectively. Sea-level rise increased the number of exposed facilities by 6–60%, depending on the sea-level rise scenario and the intensity of the hurricane under consideration. Meanwhile, estimates of the number of housing units currently exposed to hurricane storm surge ranged from 4.1 to 9.4 million for category 1 and category 4 storms, respectively, while exposure for category 5 storms was estimated at 7.1 million due to the absence of landfalling category 5 hurricanes in the New England region. Housing exposure was projected to increase 83–230% by 2100 among different sea-level rise and housing scenarios, with the majority of this increase attributed to future housing development. These case studies highlight the utility of geospatial hazard information for national-scale coastal exposure or vulnerability assessment as well as the importance of future socioeconomic development in the assessment of coastal vulnerability.