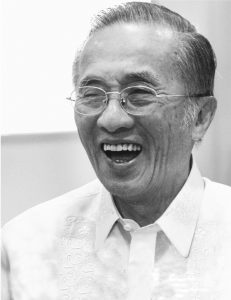 Oscar M. Lopez’s lifelong love for nature, science and the environment has led him to become a pioneer advocate for businesses’ role in addressing climate change.

In the early part of his career and entry into the family corporation through the newspaper, The Manila Chronicle, he established the science beat, the first of its kind in the Philippines, and created and published the magazine “Philippine Farms and Gardens”.

In 1986, he had the responsibility of building back First Philippine Holdings (FPH). He not only worked to get the company out of its debt, but he advanced money to invest in reforesting 1,000 hectares of barren land in Tarlac.

When FPH acquired the Energy Development Corporation (EDC), and with it the custodianship of watersheds that fed the geothermals, restoring and protecting forests became not just a corporate social responsibility but sustainable business sense. Thus, EDC’s greening legacy called BINHI was born. The goal was to reforest 1,000 hectares every year for ten years.

As early as 2007, at the Stockholders’ Meeting of natural gas company First Gen, he said that “the pressure to switch to cleaner fuels and sources of energy that produce less carbon as a byproduct” is set against the backdrop of “the growing threat of global warming.”

In 2012, a year before Typhoon Yolanda (Haiyan), he established the Oscar M. Lopez Center for Climate Change Adaptation and Disaster Risk Management Foundation, Inc. with the vision to help the Filipino build natural resilience to adversity by harnessing science to produce knowledge that leads to action.

Dr. Rodel Lasco is a pioneering and multi-awarded scientist with more than 35 years of experience at the national and international level. The author of over 80 technical publications, his work focuses primarily on natural resources conservation, climate change, and land degradation. He is an author of several reports of the Intergovernmental Panel on Climate Change, the 2007 co-winner of the Nobel Peace Prize, as well as a member of the National Academy of Science and Technology in the Philippines. He also serves as the Philippines Coordinator of the World Agroforestry Centre and as an affiliate professor at the University of the Philippines Los Baños.

The Programs Department brings together the Center’s core functions and programs to develop user-centered co-produced climate-related knowledge to support the Center’s vision of building climate resilience.

The Support Services team serves as the backbone of our institution. In charge of overseeing human resources, finance, and overall administration, it provides and fortifies the infrastructure for all other units and their individual programs. It also provides crucial support to the Center by coordinating, managing and implementing external support systems that help bolster and further the Center’s programs.

May Fer B. Tupaz, Finance Officer