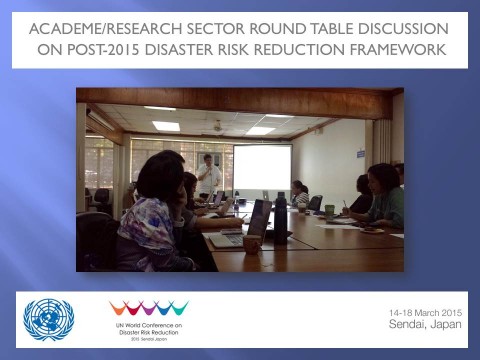 The academe/research sector of the Philippine civil society organizations (CSOs) sought in a roundtable discussion (RTD) held at the Ateneo School of Government last February 16, 2015 the inputs of different academic and research institutions for the CSO joint position on the provisions of post-2015 framework for disaster risk reduction or the Hyogo Framework for Action 2 (HFA2) that will be adopted in 3rd World Conference on Disaster Risk Reduction (3WCDRR) in Sendai, Japan on March 13-18, 2015.

The RTD was opened by Atty. Jaime Holifena, Vice President for Social Development of the Ateneo de Manila University and ensued with presentations from Ms. Lenie Alegre of the National Disaster Risk Reduction and Management Council and Mr. Reynaldo Laguda, Assistant Secretary and Chief of Staff of Department of Education on preparation updates for the Sendai Conference and the “Making our Schools Safer”, respectively.

The afternoon session tackled sector-relevant principles and crucial bracketed provisions in the negotiation text documents of the post-2015 DRR Framework. The results of the consultation shall be incorporated in the consolidated CSO position on the post-2015 DRR Framework to be released ahead of 3WCDRR, and shall be submitted to the Philippine delegation for proper representation.