Forum on Pushing Forward the Mangrove Agenda in the Yolanda Corridor 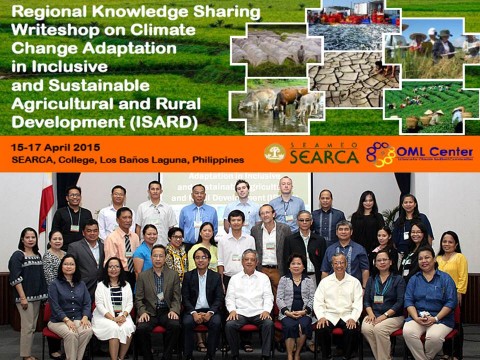 LOS BANOS, Philippines — Southeast Asia stands to lose a lot in terms of agricultural production and stability if there is no urgent, sustained action to implement climate change adaptation and mitigation in the region, warns Climate Change Commissioner Naderev Saño during a training workshop organized by SEARCA and OML Center.

“Inaction to adapt to and mitigate the impacts of climate change will threathen agricultural production in the ASEAN region, with most of Southeast Asia risking to lose up to 7 percent of its total GDP by the next century, which is more than twice the global average,” adds Saño, citing global development reports.

At the very core, the issue comes down to two possible scenarios: food availability and hunger, Saño adds.

Changes in elements such as local climate patterns, temperature, rainfall intensity, and daylight will shift production cycles and ultimately, modify food prices and source of livelihood for most in the region, the official says.

“The good news: Agriculture is a fundamental part of the solution to climate change,” says Saño during his keynote at the Regional Knowledge Sharing Writeshop on Climate Change Adaptation in Inclusive and Sustainable Agricultural and Rural Development (ISARD) held at SEARCA at the University of the Philippines Los Banos on 15-17 April 2015. [Read more].