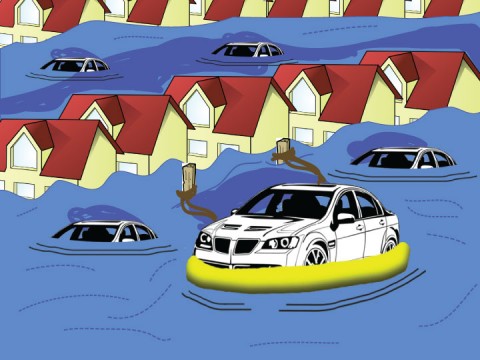 It is in the time of heavy rains and emerging typhoons that the country is facing various risks of disasters such as floods. Thanks to the new Car Floatation Device floating cars during floods is now possible.

A new study in De La Salle University (DLSU) Manila and supported by the Oscar M. Lopez Center for Climate Change Adaptation and Disaster Risk Management Foundation, Inc. (OML Center) proved that cars can also be saved by enabling them to float during typhoon seasons.

Dr. Rosemary Seva and Dr. Alvin Chua of the College of Engineering in DLSU came up with the idea of floating cars when severe flooding strikes. This study may help vehicle owners especially those who are living in flood prone areas.

Through the combined efforts in analyzing the needs of the potential stakeholders, simulation  and  experimentation of the device, the team was able to provide a solution to the major problems faced by car owners during typhoons.

The Need for the Car Floatation Device in the Philippines

Flooding has been one of the major disasters that Filipinos are experiencing during rainy seasons and times of great typhoons. The project’s purpose is to design a device that will enable cars to float, decrease the number of casualties and reduce risk of damage of vehicles in the midst of flooding in the Philippines.

“There have been existing products, but they are not good enough” said, Dr. Rosemary Seva on the past inventions that exists in the market with the function to protect cars from flood.

Part of the team’s efforts in the study is to review existing products that have been available in the market. Each of the products has been thoroughly studied and discussed specifically the strengths and weaknesses of each design.

The team also conducted focus group discussions (FGD) to be able to interview stakeholders and establish their need of the product. Based on the FGDs, stakeholders have identified that the device should be easy to use, effective and at the same time the price should be reasonable.

Features of the Car Floatation Device

The Car Floatation Device was made to enable cars to float during severe flooding conditions. It is a mitigation system to prevent cars from being destroyed and  swept away by floods brought by heavy rains and strong typhoons especially in lowland areas.

Through the team’s collaboration in the simulation and experimentation  of the product , they were able to conclude that the device can definitely work. It was through simulations that several flotation designs were tested to prove that the device is able to float the car and at the same time be stable while floating.

The device has been created to help Filipinos cope up with the disaster situation brought by the worsening climate conditions in the country. It can also help thousands of car owners in preventing their cars from being swept away by flood water.

In studying for the response of different designs of  the floating device, the team used computational fluid dynamics. It is a branch of fluid dynamics that uses numerical methods and algorithms to solve and analyze problems in fluid flows. Common applications in CFD includes  flow simulations, aerodynamics, multi-phase flows (including buoyancy), combustion, etc.

They used ANSYS CFX , a  CFD software, to simulate the different configurations of the floatation device . These  simulations show how the device will behave in   flooding situations. Based on the simulations, the device was able to show good results.

The Device and its Contributions

The actual device may still not be available in the Philippine market due to more research and also on planning for the actual prototype. However, the findings that the study provided showed that the product is indeed working.

Right now, the project leaders are considering several materials to be used in the fabrication of the actual scalel product like rubber, foam and plastic. They explained that the material chosen for the floatation device  will be critical to the success of the product in the market.

“Each of the materials has its own properties. They also have different advantages and disadvantages,” said Dr. Alvin Chua. “That’s why the materials are important. The floatation device has many requirements like for it to be lightweight and at the same time sturdy,” he added.

In times of disasters like floods, people are always torn on who or what to save. Dr. Seva emphasizes that inasmuch as material things are important and expensive, a person’s life has the most value. The device is created primarily to float cars, but at the same time it can also save lives.

“That’s our innovation. We see that this floatation system will float other things, not only cars,” said Dr. Seva.

With the desire to contribute solutions to mitigate the risks and impacts of climate change and geohazards, the floatation device could also lead to future discoveries on how to save important belongings and even lives from being destroyed and swept away by flood.