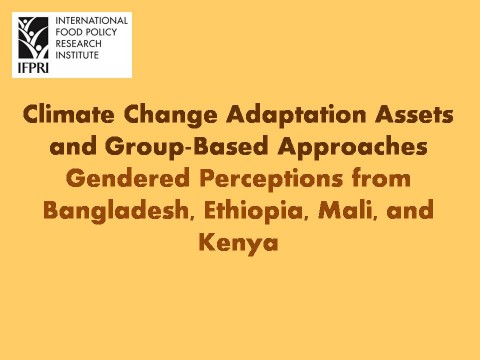 People who rely on natural resources for their livelihoods are more vulnerable to the impacts of climate change and are often limited in their capacity to adapt to the changes. Vulnerability to climate change is exacerbated when individuals’ asset base is limited or insecure. Because control over assets is highly influenced by gender—with women typically controlling fewer low-value assets than men, which are more likely to be disposed of during shocks— it is important to understand the gender dynamics of climate change adaptation and the use of assets in this process. Using a participatory rural appraisal approach, a series of qualitative studies were conducted in four countries facing negative impacts of climate change—Bangladesh, Ethiopia, Kenya and Mali—in order to determine men’s and women’s perceptions of climate change, adaptive approaches, and the degree to which assets and group participation play a role in adaptation strategies. Similarities were found across countries in terms of perceptions of climate change, impacts, and strategies for adaptation. Farmers and pastoralists, groups heavily dependent on natural resources, are starkly aware of and impacted by subtle climatic changes, and those with a stronger asset base were better able to adapt to changes and shocks. Social norms largely determine which physical assets women can own or control and how they gain ownership of them, often limiting women’s adaptive capacity. Groups were highlighted as a key strategy for adapting to climate change for men and women, primarily as a tool to facilitate asset development through group purchase of large farm appliances (physical capital), group loans (financial capital), or capacity development (human capital). Finally, the results illuminate the degree to which women’s and men’s adaptive approaches are intertwined as interdependent members of a household.