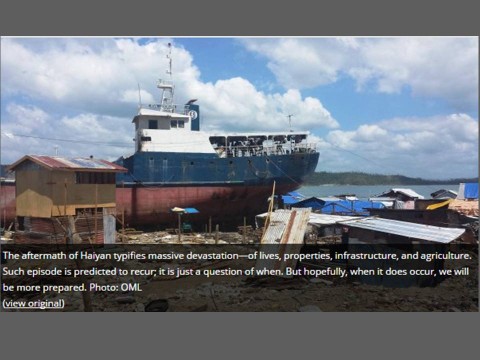 It has been almost three years since the onslaught of Super Typhoon Haiyan that wrecked the Leyte Island in the Philippines. Haiyan, a Category 5 typhoon, packed a maximum sustained wind of 315 kph, and storm surge and tide height of 20 feet in Tacloban, Leyte. The agriculture sector suffered a huge damage, which affected about 450,000 households whose livelihoods rest on farming and fishing in Leyte alone. The damages of Haiyan were massive that it entailed USD 724 million for recovery and rehabilitation of the agriculture sector.

Haiyan is now considered the benchmark of the ‘new normal’. Such episodes are predicted to recur in the future; therefore, appropriate risk response and mitigation measures should be identified.

A lead catalyst in generating science-based solutions to build climate-resilient communities, the Oscar M. Lopez Center (OML) responded to this challenge by conducting a study assessing the impacts of storm surges and sea-level rise to agricultural lands and fishing livelihoods in Leyte. This study will also look into the effect of ocean warming and sea-level rise, associated with climate change, on the intensity of storm surges and their corresponding heights.

“The Philippines is one of the most at risk countries to climate-related hazards and smallholder farmers are among the most vulnerable. This research will help us better understand how climate change could increase the risk to agriculture due to sea level rise,” said Dr. Rodel Lasco, OML’s Scientific Director.

Taking stock of learning from Haiyan, this project hopes to provide climate information that would help farmers and fisherfolks—the sector who labor to provide food and livelihoods to the majority of the Filipino people—better adapt to the threats and risks of climate change.

Maps and models are great tools for visualizing the effects of different hazards and risks. They depict and characterize the extent of the affected area with varying intensities of exposure. These can also be the basis for disaster preparedness and land use plans of the local government. This study, supported by the CGIAR Research Program on Climate Change, Agriculture and Food Security in Southeast Asia (CCAFS SEA), aims to generate maps and models for assessing the levels of vulnerability of the coasts and agricultural lands of the study sites.

In February 2016, the OML held a series of partnership meetings with the local government units of Ormoc, Tacloban and Palo in Leyte. Dialogues with the local officers and planners focused on how OML can integrate its research agenda into their current and future programs, plans and needs. Experts from the Disaster Risk Exposure Assessment for Mitigation (DREAM) project of the University of the Philippines (UP) and the UP Marine Science Institute (MSI) also helped acquire up-to-date data to be used in simulations and storm surge modeling.

The researchers are now conducting simulation and modeling tasks to validate the storm surge heights and extents of inundation generated. Results from the field validations will then produce calibrated outputs which can be used to generate vulnerability maps under different scenarios.

The data used were acquired from Light Detection and Ranging (LiDAR) systems with one meter resolution, which will help deliver accurate and precise results. The same data inputs were used in the flood modeling of 18 major river basins in the Philippines of the Department of Science and Technology. Events like that of Typhoon Haiyan and other stronger typhoons, and various tracks of typhoons, were used to simulate and compare the levels of vulnerability of different typhoon intensities and storm surge heights.

Two years after Haiyan, residents went back to live along the coasts of Leyte rendering them vulnerable once more. Left with not much choice, climate information could at least help them manage risks and appropriately respond to climate extremes. Photo: OML Center

Lasco noted that “by the end of 2016, we hope to complete the results of simulation modeling showing how sea-level rise and storm surges due to climate change could affect smallholder farmers in Leyte. Such information will be shared with LGU planners and development workers so that they can better appreciate the impacts of climate change. Ultimately, we hope that the use of advanced technologies can better prepare smallholders for what lies ahead.”