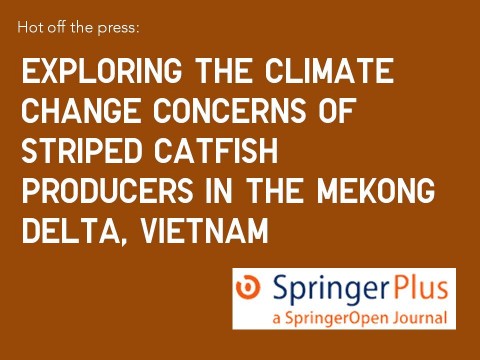 This study investigated the perceptions on and adaptations to climate change impacts of 235 pangasius farmers in the Mekong Delta, Vietnam. Data were collected using semi-structured household surveys in six provinces, from three regions along the Mekong river branches. A Chi-Square test was used to determine the association between variables, and a logit regression model was employed to identify factors correlated with farmer’s perception and adaptation. Less than half of respondents were concerned about climate change and sought suitable adaptation measures to alleviate its impacts. Improving information on climate change and introducing early warning systems could improve the adaptive capacity of pangasius farmers, in particularly for those farmers, who were not concerned yet. Farmers relied strongly on technical support from government agencies, but farmers in the coastal provinces did not express the need for training by these institutions. This contrasting result requires further assessment of the effectiveness of adaptation measures such as breeding salinity tolerant pangasius.