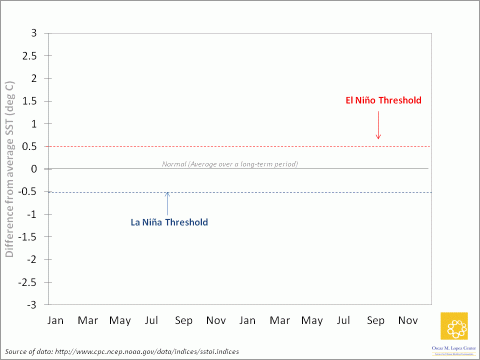 Weather authorities are now saying that El Niño Southern Oscillation or ENSO-neutral conditions are present since sea surface temperatures (SST) in the Central Pacific Ocean returned to normal by end of May. After a strong and impactful year of El Niño, what’s next?

While we are technically in an ENSO-neutral condition since early June, some elements of El Niño are still hanging around, so PAGASA (and other international weather agencies) still released an “El Niño Advisory” early this month. Also, PAGASA issued a “La Niña Watch” which means that conditions are favorable for its development within the next six months.

Icon adopted from the Australian Bureau of Meteorology

With the onset of the rainy and southwest monsoon season, some areas in the country may benefit from enhanced rainfall late this year but will not see immediate improvements as El Niño has already worn down some of our countrymen’s coping capacities, particularly farmers.

Is La Niña next?

The strong 1972/73 El Niño event (not shown in the figure) was followed by a quick transition to strong La Niña conditions  On the other hand, SSTs following the 1982/83 El Niño stayed around just a bit below zero before settling into a moderate La Niña in 1984. The 1997/98 El Niño also resulted in a strong La Niña event that lasted for a long time.

Most forecast models now show that the possibility of a La Niña event will increase from about 50 percent in July to about 75 percent from October onwards. So if a La Niña event develops, it should peak towards the last quarter of 2016 and continue into early 2017.

Tropical cyclones, monsoons (both habagat and amihan), and low and high pressure areas during this period may enhance or moderate the impacts of La Niña.
What are the most notable La Niña events in the past?

The 1997/98 strong El Niño was followed by a La Niña episode in 1999 where many parts of the country experienced intense rainfall and flooding. It is also one of the factors that caused the landslide at the Cherry Hills Subdivision in Barangay San Luis, Antipolo City that killed almost 60 people.

The landslide in Barangay Guinsaugon, Saint Bernard, Southern Leyte in early 2006 was triggered by too much rain during a La Niña event that formed in November of 2005, among other significant factors. This resulted in more than a thousand casualties and buried an entire village.

The latest La Niña event was in 2011/12 and, while considered on the weak side of the La Niña spectrum, it enhanced the southwest monsoon (habagat) causing massive flooding due to several days of intense to torrential rains in Metro Manila and parts of Luzon.
So what might La Niña mean for us in the next few months?

Rainfall
It’s not going to be our usual rainy season, that’s for sure. Once La Niña kicks in, we can expect above normal rainfall starting August or as early as July, or even excessive rains if La Niña leads to stronger monsoon activities and coincides with tropical cyclones.

This means higher risk of flooding and landslides particularly in low lying and mountainous areas, respectively.

Tropical Cyclones (TCs)
Tropical Depression Ambo marked the start of the TC season. Historically, the period with the highest number of TCs to affect the country also coincides with the peak months of rainfall during the southwest monsoon/habagat season (July – September). This is also followed by the northeast monsoon/amihan season (October-February) when the TC season is still active and rains are also paramount in the eastern side of the country. And since ENSO causes seasonal changes in our climate system, it will not be surprising if TC characteristics (how strong and how often) will be influenced by La Niña. As to how and when, we’ll know more about it soon.
But can we do something now to make ourselves ready for La Niña?

You don’t need to look up at the sky or watch the horizon every now and then for this imminent La Niña; we will take care of that for you and give more details if and how the coming La Niña can specifically affect us in the next few months.

Meanwhile, here are some things that will help you get by the rainy and TC season. This will hopefully equip you if and once La Niña stirs things up for the worse. 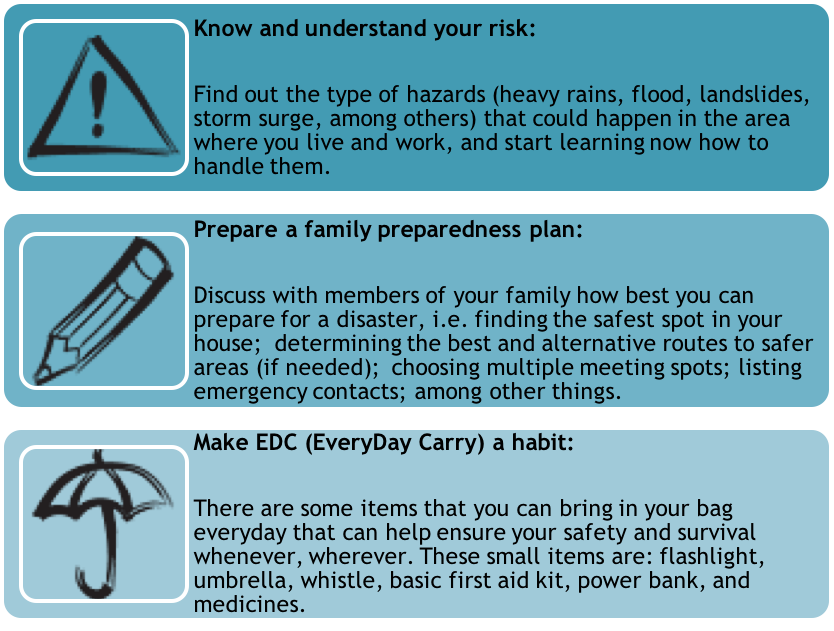 Stay tuned for our next advisory on Preparedness.

Always remember, be aware and be prepared. Choose resilience.

—————————————
Read our Rainy Season Advisories: Here comes the rain again, Rhythm of the falling rain, Through the rain

Read our first Advisory on Preparedness: Achieving a level of preparedness for disasters and watch out for more!
—————————————

The Oscar M. Lopez Center will continue to monitor the weather and provide advisories​ if and when appropriate.

DO YOU WANT TO KNOW MORE ABOUT THE PHILIPPINE CLIMATE?
Download a copy of the State of the Philippine Climate 2015!