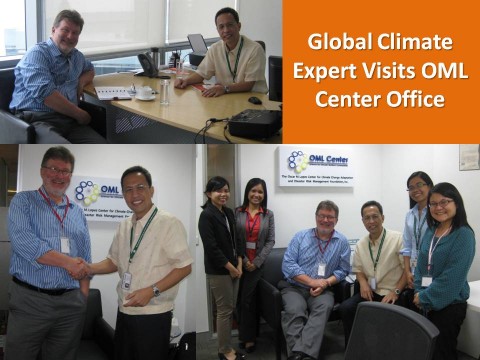 Dr. Thomas Downing, President and Chief Executive Officer of Global Climate Adaptation Partnership (GCAP) and Director of GCAP United Kingdom (UK) visited the OML Center Office to discuss possible project collaboration. Dr. Downing received his PhD in Geography from Clark University. Over his career, he has held a number of influential positions, including Advisor to the United Nations Environment Programme and the Munich Re Foundation Chair for Social Vulnerability.  Before establishing GCAP, he was the first Director of the UK Climate Impacts Programme at the Environmental Change Institute, Oxford University. He later became the Director of the Stockholm Environmental Institute’s Oxford office, where he managed a $2 million revenue base.

In his 30 years of experience working in the field of adaptation and vulnerability, he has led numerous projects. He is currently leading a GCAP consortium to undertake Phase two of the Ethiopian Climate Resilience Programme funded by the Global Green Growth Institute (GGGI).  He continues to work with the African Development Bank on Climate Safeguards.