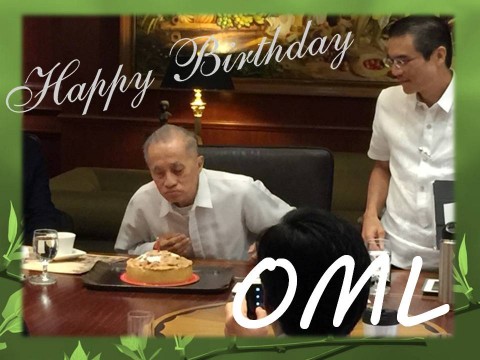 OML presides over a business network numbering over 160 corporations with close to 20,000 employees. He is married to the former Connie Rufino, with whom he has eight children and 27 grandchildren; they recently enjoyed the coming of their first great-grandchild.

1930
• Born on April 19, the second of the five offspring of Eugenio H. Lopez Sr. and Pacita Moreno Lopez.

1945
• Walks with his family down from the mountains for three days to escape the fighting between US and Japanese forces in Baguio. takes turns with Geny to carry younger brother Manuel, 2. The party of 70 or 80 people, including Margot Fragante, takes two nights and three days to complete the trek.

1946
• Spends a year at the Ateneo before moving to the Bellarmine School in San Francisco, California, where he earns his high school diploma.

1960
• Returns to Ma-nila to assume the res-ponsibilities of pub-lisher of the family-owned The Manila Chronicle, a position he holds for six years.

1972
• Stays in Manila to take care of the family businesses and investments even as the country is placed under martial law in September.

1975
•The Lopez patriarch, Eugenio Sr., passes away while in exile in the US.

1982
• Publishes the first of four volumes on the Lopez family, a project he started in 1976. The series covers about 200 years and more than 2,000 Lopez descendants.

1986
• Becomes CEO of FPHC soon after the EDSA Revolution; the company has debts and liabilities in excess of P2 billion.

1999
• Assumes leadership of the Lopez Group after Geny passes away. Among other innovations, he introduces the Group to quality improvement initiatives such as Six Sigma and ISO certification. OML receives the MAP award in January 2001. With him are Johnny Santos, Connie Lopez and Ric Pascua.

2001
• Hailed by the Management Association of the Philippines (MAP) as its Management Man of the Year.

2002
• Lands on the cover of Far Eastern Economic Review, whose August 15 headline is “Saving the Family Business.”

2003
• Climbs Mt. Pinatubo with most members of his family, including wife Connie. OML is recognized as one of Asia’s top business leaders.

2005
• Bats for family planning and other reproductive health services—one of his advocacies— to be included in the HR programs of the Lopez companies as a way of enhancing the quality of life of the employees.
• Receives the Officer’s Cross of the Order of Merit of the Federal Republic of Germany, the first Filipino businessman to be accorded the honor.

2007
• Conquers another peak at 76, this time Mt. Pulag, Luzon’s highest.
• Recognized by Forbes magazine as a “Hero of Philanthropy” in Asia in recognition of the Lopez family’s efforts to assist in livelihood programs in Guimaras. The city of Manila also names him as the year’s Outstanding Manilan in corporate leadership and social responsibility.
• Elected chairman of the Philippine Center for Population and Development.

2008
• Conferred the first Philippine Military Academy (PMA) Distinguished Citizen Award.
• Announces the Group’s commitment to support a 10-year, P405-million reforestation program called “Binhi” to be implemented by Energy Development Corporation (EDC) during the Clinton Global Initiative.
• Recognized by the Forum for Family Planning Development as the fifth Eminent Person for his advocacy of and being the first to introduce a family health program in the workplace. He joins former President Fidel V. Ramos, former Prime Minister Cesar Virata and SGV founder Washington Sycip.
• Summits Mt. Apo in Mindanao, the country’s highest mountain.

2009
• Receives the Outstanding Filipino Award (TOFIL) and is also conferred a Doctor of Laws degree, honoris causa, by the Philippine Women’s University (PWU).