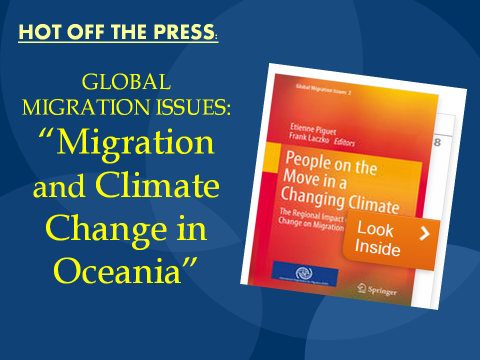 Migration and Climate Change in Oceania

Two characteristics of the Pacific Islands region (Oceania) are high levels of exposure to environmental extremes and a long tradition of population mobility. Accordingly there are a number of examples of community relocation following natural disasters. Small island developing states have been identified as likely to have high levels of exposure to the effects of climate change. In Oceania these effects may include sea-level rise, increased incidence and intensity of floods and droughts, coral degradation, increased intensity of tropical cyclones, and changes in the distribution of disease vectors. It is possible that some locations, especially atolls, coasts (where the great majority now live), deltas and river flood plains may become uninhabitable.

There is a need to distinguish community relocation from individual and household migration. There have only been three international instances of the former and in only one case was an entire island population relocated. Community relocation is much more common at the local level and occasionally follows tropical cyclones and associated storm surge. If places become uninhabitable such relocation may be unavoidable, and countries composed only of atolls may require international migration. It is much more difficult to determine the reasons for individual and household migration but loss of livelihoods through environmental degradation may be a significant factor. Such migration may be considered as a rational climate change adaptation where reductions in livelihoods may be offset at the place of origin although there may be significant implications for the structure of remaining small populations. In this chapter we examine several instances of internal relocation and the three ‘international’ cases that occurred during the colonial era.