Dr. Lasco speaks on how trees can help mitigate the impacts of natural disasters 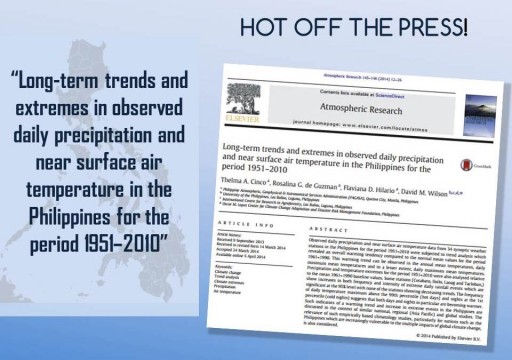 HOT OFF THE PRESS! Check this new journal article sponsored by the the OML Center and co-authored by partners from Philippine Atmospheric, Geophysical and Astronomical Services Administration (PAGASA) and OML Center Technical Writer

Observed daily precipitation and near surface air temperature data from 34 synoptic weather stations in the Philippines for the period 1951–2010 were subjected to trend analysis which revealed an overall warming tendency compared to the normal mean values for the period 1961–1990. This warming trend can be observed in the annual mean temperatures, daily minimum mean temperatures and to a lesser extent, daily maximum mean temperatures. Precipitation and temperature extremes for the period 1951–2010 were also analysed relative to the mean 1961–1990 baseline values. Some stations (Cotabato, Iloilo, Laoag and Tacloban,) show increases in both frequency and intensity of extreme daily rainfall events which are significant at the 95% level with none of the stations showing decreasing trends. The frequency of daily temperature maximum above the 99th percentile (hot days) and nights at the 1st percentile (cold nights) suggests that both days and nights in particular are becoming warmer. Such indicators of a warming trend and increase in extreme events in the Philippines are discussed in the context of similar national, regional (Asia Pacific) and global studies. The relevance of such empirically based climatology studies, particularly for nations such as the Philippines which are increasingly vulnerable to the multiple impacts of global climate change is also considered.