Shape Up, Don’t Shake It Off: An Environment Committee Learning Session on Disaster Management and Sustainability

[CLOSED] Call for Participants for Workshop on L&D, CCA, and DRR in Richmonde Hotel, Ortigas 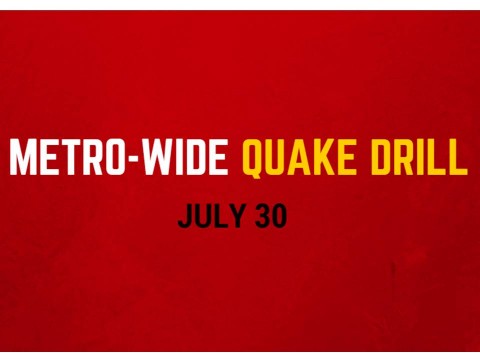 The Metropolitan Manila Development Authority (MMDA) has announced a metro-wide earthquake drill to be held on 30 July 2015 as part of the government’s preparations for a possible 7.2 magnitude tremor.

According to the announcement, electricity and mobile phone services would be cut throughout the metropolis. All private and government offices as well as businesses, including shopping malls would be closed between 3 p.m. and 8 p.m. to simulate the scenario of a 7.2 magnitude earthquake.

Preparations are being made prior to the warning given by the Philippine Institute of Volcanology and Seismology (PHIVOLCS) that an earthquake of that magnitude could occur and kill at least 33,500 people and injure at least 113,600 others following a movement in the West Valley Fault that transects 42 barangays in Quezon City, Marikina, Pasig, Makati, Taguig, Muntinlupa and 30 barangays in Bulacan, Laguna and Cavite.

Know more about earthquake preparedness by downloading the following resources authored by the Energy Development Corporation through the following links:

In this latest edition of the Emergency Handbook, you will find new topics such as basic rst aid for sprains, stroke and fits as well as advisories on earthquakes and typhoons for those travelling overseas.

This presentation by the EDC tells us just what to prepare for your family before disaster strikes.

Know the essentials and prepare your own go bag using this list.