How much do disturbed and restored mangrove stands contribute to climate resilience?

QUIZ: Everything But the Weather

How much do disturbed and restored mangrove stands contribute to climate resilience? 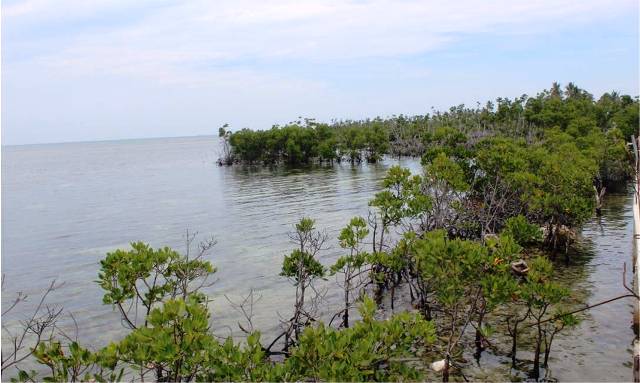 In a study recently published in the Philippine Science Letters, researchers Severino G. Salmo III, PhD and Eunice Lois D. Gianan assessed the stocks and rates of carbon sequestration in mangroves that were disturbed by typhoons and that were converted to aquaculture ponds.

The study, which was supported by the OML Center, shows that disturbances contribute to changes in stocks and rates of carbon sequestration in mangroves. The results of the study could aid in the improvement of mangrove restoration practices, in conserving natural stands, and in optimizing the capacity of mangroves to enhance resilience against climate change.

The Role of Mangroves in Climate Resilience

Mangroves are widely recognized to significantly contribute to climate mitigation  through reducing atmospheric carbon dioxide, and to reducing vulnerability by cushioning the impacts of sea-level rise. Loss of mangroves, therefore, puts carbon stocks at risk and lowers resilience to the effects of climate change.

According to the study, healthy Philippine mangroves have a carbon sequestration potential estimated at 180 million tons, which is equivalent to approximately 661 million tons of avoided carbon emissions. While the Philippines has already initiated “blue carbon” programs, little information exists regarding carbon stocks and rates of sequestration in mangroves affected by, and recovering from disturbances, such as typhoons and conversion to aquaculture ponds.

Using field experiments, ecological modeling, and meta-analysis, the study assessed the differences in the rates of carbon sequestration in mangroves as affected by different forms of disturbance. The sampling sites were composed of mangroves that experienced disturbances: Salcedo, Samar for typhoon disturbance and Bani, Pangasinan for conversion to aquaculture fishponds. The study was also designed to account and compare total carbon stocks and rates of carbon sequestration of natural, planted, and colonized mangrove stands.

Carbon stocks were measured from the biomass and sediment compartments from typhoon-impacted sites (composed of natural and planted stands) and from mangrove-colonized abandoned fishponds. Using a stock-change approach, the rates of carbon sequestration were estimated at intra-annual and post-disturbance levels.

The ecosystem services naturally rendered by mangroves significantly contribute in the Philippines’ climate change adaptation and mitigation strategy. However, Philippine mangroves are subjected to various natural and anthropogenic disturbances, which cause substantial reductions in carbon stocks.

Further, mangroves grown in abandoned, underutilized or undeveloped fishponds following natural colonization process can sequester and store higher carbon stocks than those planted in coastal fringes. Through this strategy, the country has the potential to gain additional carbon stocks of 72 million tons equivalent to approximately 265 million tons of avoided carbon dioxide emissions 10 years after mangrove planting.

The study underscores that mangrove conservation should therefore be complemented with more proactive restoration. Rather than leaving them to natural colonization process, a more proactive approach on the rehabilitation of abandoned, underutilized and underdeveloped fishponds shall enhance carbon sequestration in Philippine mangroves.

Information regarding carbon stocks and rates of sequestration in mangroves affected by, and recovering from disturbances, such as typhoons and conversion to aquaculture ponds is needed in the assessment of total carbon stocks in Philippine mangroves, and help estimate the contribution of mangroves in attaining the country’s commitment of reducing greenhouse gas emissions.

The study recommends that more permanent monitoring plots should be established in other biogeographic regions in the country, of different ecosystem health, and of different disturbance types in order to have a more accurate estimation of total carbon sequestration. This will yield a better estimate and comparison of carbon stocks in conserved against disturbed mangroves, an understanding of how much is being lost or gained when mangroves are disturbed or converted to other uses, and an understanding of how much time will be needed to recover the lost carbon stocks.

Severino G. Salmo III, PhD is a full-time assistant professor at the Department of Environmental Science, School of Science and Engineering, Ateneo de Manila University. Eunice Lois D. Gianan is a university researcher at the Marine Science Institute, University of the Philippines, Diliman.

For more information on this study, visit the OML Resilience Grant page on “A comparative analysis among disturbed, restored, and natural mangrove stands in the vulnerability and adaptability against climate change” or visit the Philippine Science Letters website.