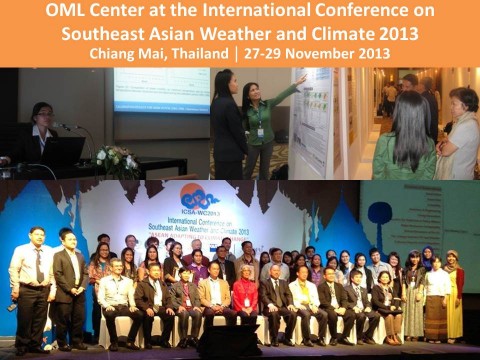 OML Center had a strong presence at the International Conference on Southeast Asian Weather and Climate 2013 (ICSA-WCA 2013) held in Chiang Mai, Thailand, 27-29 November 2013 as paper (by Researcher, Ms. Rafaela Jane Delfino) and poster (by Program Manager, Ms. Perlyn Pulhin) presenters. The theme of this year’s ICSA is “ASEAN Adapting to Climate Change”. It focused on the assessment of the current research on climate change adaptation within the ASEAN community by fostering creative dialogue among policy-makers and practitioners.

About the Conference
ICSA is an annual event that is hosted by different city in Southeast Asia each year. It is committed to highlight current developments in understanding of climate change and potential impacts in the region.

Climate change worldwide has affected ecosystems, resulting in increasingly destructive natural disasters, and severe impacts on the global production systems involving millions of people. Earth’s temperature has increased an average 0.2 degrees Celsius per decade over the past 30 years. This has caused seasonal changes and more frequent and severe natural disasters, including floods, earthquakes, landslides, storms, droughts and forest fires. Ecosystems in many areas have become vulnerable, leading to loss of biodiversity.

The earth’s surface has undergone physical change, including coastal erosion and a rise in sea level, resulting in the forced migration of coastal communities and damages to infrastructure, tourist ideas, and high-investment industrial zones. Global warming has created water shortages and has increased epidemics of infectious diseases. In the long run, worldwide climate change will become more and more extreme and will aggravate food shortages. Southeast Asia is especially vulnerable because agricultural crops are major sources of income for these economies.

Scope and Highlights of the Conference
During the three-day conference, over 500 presenters and participants interested in environmental and climate issues came together from around the world to exchange ideas and research results through a series of events and discussions focused on Southeast Asia. ICSA-WCA 2013 has helped identify possible adaptation and mitigation options and strategies for policy-makers based on research findings and experiences presented. The themes of the five parallel sessions are as follows: Science and Weather and Climate; Natural Disaster Impacts of Climate Change; Agricultural Impacts of Climate Change; Adaptation to Climate Change; and Climate Change Education. The Conference, apart from building a database and information system on climate change, has helped in finding appropriate cost-effective solutions to problems arising from climate change.

Organizers
The Conference was organized by an international Committee for Southeast Asia membership which includes representatives from the Chang Mai Rajabhat University, Green Tress Foundation, Northern Meteorological Center, National Science Museum, The Institute for the Promotion of Teaching Science and Technology, The Royal Rainmaking and Agricultural Aviation Department, Yunnan province Meteorological Society (China), and d Queensland University of Technology (Australia). It was co-sponsored by Dhurakij Pundit University and Thailand Convention and Exhibition Bureau.