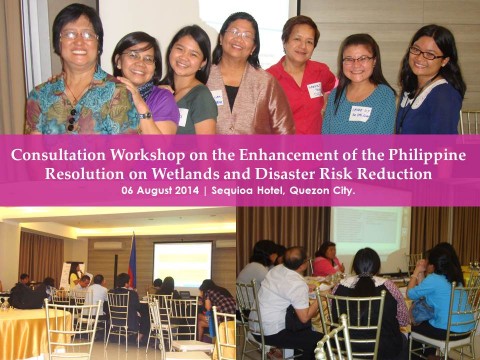 The OML Center participated at the Consultation-Workshop on the Enhancement of the Philippine Resolution on Wetlands and Disaster Risk Reduction in Sequioa Hotel, Quezon City on 6 August 2014.

The Philippines, through the Biodiversity Management Bureau-DENR as National Administrative Authority for the Ramsar Convention on Wetlands, have submitted a Draft Resolution on Wetlands and Disaster Risk Reduction which will be proposed for adoption at the 12th meeting of the Conference of Parties of the Ramsar Convention on Wetlands in June 2015. The Resolution primarily aims to encourage Contracting Parties to work together in developing a framework or set of guidelines that would emphasize disaster risk reduction through the wise use of wetlands. In addition, it calls for the prioritization of this concern in the Ramsar Strategic Plan for the next Triennium.

The national consultation brought together different stakeholders – from government agencies to NGOs – and local experts to generate inputs that would improve the proposed Ramsar Resolution. During the workshop, participants were divided into small groups to discuss operational themes considered in the Resolution concerning Contracting Parties, the Ramsar Scientific and Technical Review Panel and the Ramsar Secretariat. The points examined included consideration of the Hyogo Framework for Action; integration of ecosystem-based management such as wetlands management into sectoral and national and local plans and strategies; and development of policy, guidance, and set of actions on the use of wetlands for disaster risk reduction and climate change adaptation, among others. The outputs of the workshop will be incorporated in the final draft of the Resolution for further review by international experts and the Ramsar Secretariat and possible adoption at COP12.

The consultation provided an opportunity for the OML Center to contribute to national initiatives in raising awareness on the importance of wetlands in disaster risk reduction and climate change adaptation.