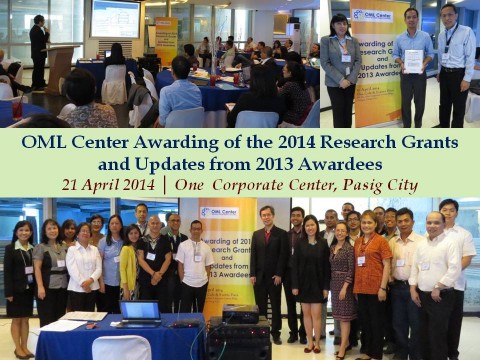 The OML Center has awarded research grants to seven (7) projects that seek to alleviate and aid the country on disaster risk management and climate change adaptation. The projects were formally recognized at the “Awarding of 2014 Research Grants and Updates of the 2013 Awardees”, on April 21, 2014 in Ortigas, Pasig City.

The University of the Philippines has four projects that aim to address some of the country’s problems brought by climate change. One of the projects focuses on an innovative way of boosting water supply and controlling flood by using collapsible rubber tanks (CRT) to harvest and manage rainwater. Another project will create agent-based models (ABM) on sustainable livelihoods for vulnerable (landslide-affected) communities. The main objective of the third project is to enhance the resiliency and coping capacity of Indigenous people to climate change. The fourth project seeks to calculate the entire water resources of the country and how it can be affected by climate change to serve as basis for a genuine program on water resources management.

To help create a health-focused and community-based vulnerability and adaptation (VA) tool related to climate change, the OML Center will fund the project proposed by De La Salle University.

From Isabela State University, one project which aims to create models on productivity and climate change sensitivity of corn and rice crops was also approved to receive OML Center grant. Crop simulation models would help in investigating climate change impacts on crops and in bridging yield gaps and attaining potential yield which could help farmers achieve best results in spite of the effects of climate change.

The Earthquakes and Megacities Initiative (EMI), a non-profit scientific organization was also granted funding for a project that seeks to mainstream disaster risk management to land use planning by developing the competencies, tools and communities of practice (CoPs) of communities.

OML Center recognizes the critical role that science and technology play in enhancing the resiliency and coping capacity of the various sectors of society to threats of climate-related risks and geohazard impacts. It seeks to create a “Center of Excellence” by generating science-based solutions to the effects of climate change and disasters in the country. The seven (7) projects will help the Center develop more climate-resilient communities in the country.

Moreover, the Center aims to build a Philippine interdisciplinary and cross-sectoral network of researchers, academics and practitioners which would enhance understanding and actions on climate-change and geohazards impacts. There was an active interaction among experts and scientists during the event while discussing the project updates of the 2013 research grantees.

OML Center, further seeks to strengthen linkages within the national and local government in order to maximize solutions and reduce impacts of disasters and climate change in the country.