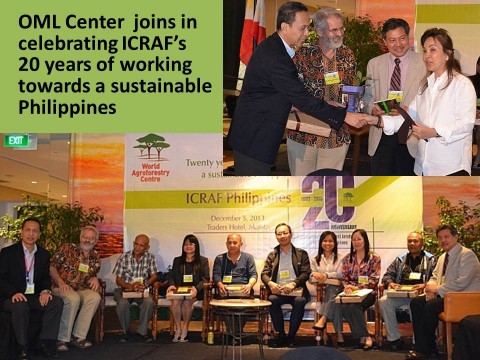 The OML Center, represented by its Program Manager, Ms. Perlyn Pulhin gave a testimonial of ICRAF’s contributions in the private sector, along with other panel of partners at the ICRAF’s 20thAnniversary celebration. This event was organized to celebrate ICRAF’s 20 years of research in the Philippines on agroforestry and natural resource management. It was held at the Traders Hotel Manila, Pasay City, Philippines and was attended by over 100 former and current partners and beneficiaries nation-wide.

Contributions of ICRAF-Philippines
Senator Legarda represented the policy makers in the panel discussion during the event. She was joined by representatives from farmer beneficiaries, NGOs, LGUs, universities and donor organizations. The speakers talked about the influence of ICRAF’s work in their sectors, and how they would envision ICRAF direction in the future. The panel was chaired by Dr. Marian delos Angeles, former ICRAF-Philippines Country Coordinator and present Chief-of-Party of the B+WISER program.

Mr. Marcelino Patindol, a Landcare farmer who represented farmer beneficiaries also testified to the positive impacts of ICRAF-Philippines on him and his community’s livelihood, through its agroforestry research and extension. His presentation showed images of his formerly barren land, now planted with trees and cash crops through the assistance of the Landcare program. ICRAF-Philippines’ Claveria Research Manager Dr. Agustin Mercado Jr. headed the said program. Patindol described how he was able to share his new knowledge to other farmers in his community. He vowed to continue following and sharing to others the sustainable farming principles of Landcare for the rest of his life.

Representing donor agencies, academic institutions, and non-government organizations were Mr. Oliver Agoncillo of the United States Agency for International Development (USAID), Dr. Victoria Espladon of the University of the Philippines Los Baños, and Ms. Perlyn Pulhin of the Oscar M. Lopez Center for Climate Change Adaptation and Disaster Risk Management Foundation, Inc., respectively. They each highlighted the role of ICRAF’s work in their institutions, pushing forward parallel goals of sustainable development, as well as innovative quality research and extension. The speakers all declared that they are looking forward to more collaboration in the future.

Mr. Ben-Errol Aspera from the Landcare Foundation of the Philippines, Inc. and Mr. Daniel Somera, Deputy Protected Area Superintendent of Mt. Kitanglad Range Natural Park, both came all the way from Northern Mindanao to represent the NGOs and local government agencies. Both Aspera and Somera thanked ICRAF for its unwavering support, and for its role in widening their networks and resource base.

20 years and beyond
ICRAF’s presence in the Philippines began in 1993 through Dr. Dennis Garrity, who became the country’s first coordinator. He also eventually became the Director General of the Centre from 2001 to 2011. Since 1993, ICRAF-Philippines has been active in conducting research and development projects throughout the country. The Centre is recognized for its extensive experience in farming systems research, natural resources management and biodiversity conservation, climate change mitigation and adaptation, and payments for environmental services.  The Centre is committed to achieve a sustainable Philippines through transforming lives and landscapes with trees.

Now based in ICRAF’s headquarters in Nairobi, Kenya, Dr. Garrity made his presence felt during the anniversary through a video message, where he recounted the humble beginnings of ICRAF in Claveria. As for its future direction, Dr. Garrity explained that ICRAF in the Philippines is among the world’s greatest scientific research centres that are problem-oriented, and tightly linked with smallholder farmers. “These practical types of research are what enable us to refine technologies that will provide farmers’ solutions. This is the future,” said Dr. Garrity.

ICRAF Chief Science Advisor, Dr. Meine Van Noordwijk, was able to grace the event to provide the keynote speech. He presented questions for reflection (“where, when, for whom and with whom”) among the ICRAF-Philippines team, as to the research being conducted. ICRAF Southeast Asia Regional Coordinator Dr. Ujjwal Pradhan was also there to provide the closing speech and he likewise congratulated ICRAF-Philippines for the contributions to the country.