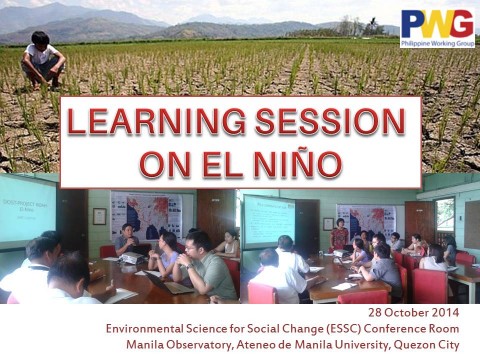 The OML Center participated in a learning session on El Niño held last October 28, 2014 at the Environmental Science for Social Change (ESSC) conference room at the Manila Observatory. The learning session was organized by the Philippine Working Group on Disaster Risk Resilience (PWG). The PWG is an arm of ESSC that seeks to deepen the understanding of disaster risk, contribute to critical policy review, and recommend points for action.

The event served as a venue wherein the media, scientific community, and relevant organizations were able to discuss and learn about El Niño events and how it affects the Philippine climate. The event helped clarify the probability of an El Niño induced drought happening in 2015, when it will possibly happen, and what factors should be considered on its onslaught. The information learned will aid in the proper communication of El Niño effects and consequently the proper steps in preparation for it.

El Niño is a prolonged period of warming of sea surface temperatures in the Pacific Ocean and causes climatic changes in the tropic and sub-tropic regions. El Niño’s onset began June 2014 and its effects may be felt in the Philippines up to the first quarter of 2015 according to PAGASA.