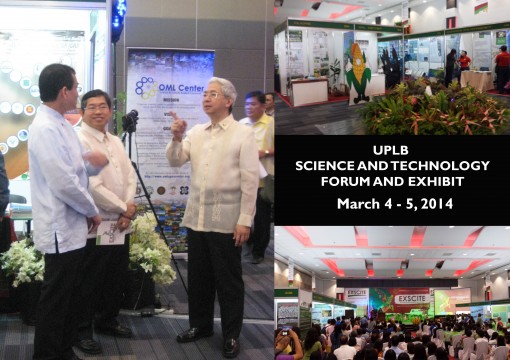 A prelude to the UPLB’s 105th Foundation Day on March 6, 2014, the University of the Philippines Los Baños (UPLB) held the Science and Technology Forum and Exhibit, with the theme “Making Science Work for Sustainable Development”, at the SMX Convention Center in Pasay City from March 4 to 5. Participated by the OML Center, this event aimed to uphold and promote science and technology in the country as well as to showcase some of UPLB’s most innovative and cutting edge technologies.

The first day unveiled the current interdsciplinary and transdisciplinary approach embraced by UPLB. According to its Chancellor, Dr. Rex Victor Cruz, the approach mainly aims to make the university’s research, development and extension (RDE) agenda more holistic, inclusive and responsive to the needs, challenges and problems of the Philippine society. As part of UPLB’s RDE agenda, 18 new and existing interdisciplinary studies centers—that focus on the advancement of scientific and technical knowledge—were launched on the first day.

The second day then graced the speech of prominent journalist Jessica Soho, who emphasized the critical role of science and technology in the country and the need to laymanize scientific information into language that newsmakers can easily comprehend and translate for the public. UPLB’s Outstanding Teacher Awardee for 2014, Dr. Renato V. Torres, was also recognized on the second day.

On both days, selected newly-launched interdisciplinary studies centers gave presentations on their RDE projects and studies. Among these centers is the Climate Change and Disaster Risk Reduction Studies Center, which aims to develop national and local climate change adaptation and mitigation strategies for a climate-resilient agriculture, environment and natural resources sectors.