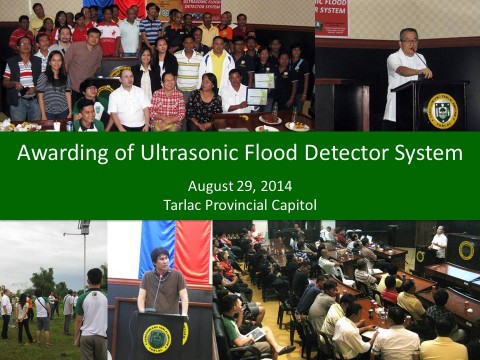 The ultrasonic flood detector system is one of the outputs of the project “Impact and Risk Analyses of Climate Variability on Food and Environmental Security in Tarlac Province.” This project is funded by the OML Center through their Research Grants initiative that aims to “help the most vulnerable deal with the impacts of climate change and natural disasters.” The flood detector systems serve as early warning mechanisms to alert residents on flooding incidence.

The awarding ceremony was attended by the beneficiaries of the flood detector system from Paniqui, Ramos, and Pura. Messages were given by the Br. Narciso Erguiza, Jr. FSC, President of DLSAU; Ms. Perlyn Pulhin, Project Manager of OML Center; and Hon. Victor Yap, Governor of Tarlac. Engr. Banaguas also presented his study on the said project during the ceremony. After the awarding of certificates, Engr. Banaguas, along with his two Junior Research Scientists, OML Center representatives and group of experts, went to the three barangays in Tarlac where the systems were installed in order to simulate and explain the system to the local officials.

This project aims to use technical modelling to help the poorest and most vulnerable communities in the country. More ultrasonic flood detector systems are expected to be distributed and installed within the country with the goal of increasing the resiliency of Filipinos to flooding.