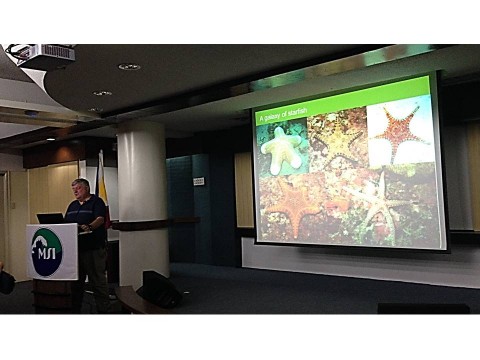 The Philippine Marine Biodiversity Expedition is a collaborative work between the California Academy of Sciences (CAS) and other local and international universities that seeks to further explore the marine biodiversity of the Verde Island Passage (VIP), which is considered to be the center of marine biodiversity in the whole world. The initial results of the expedition were presented last 30 March 2016 at the University of the Philippines Marine Science Institute.

The team from CAS through Dr. Terry Gosliner (shown in photo), Dr. Kent Carpenter, and Dr. Richard Mooi presented the initial findings of their expedition, showing the diversity of various marine organisms along the VIP. The study made a number of discoveries by identifying new fish, nudibranch and echinoderm species. Further, they were able to find “living fossils” of echinoderms which once dominated the sea floor 500 million years ago. These findings shall prove as excellent bases for further strengthening the conservation of the marine ecosystems in the region.

To fully appreciate the findings of the study, the CAS also shared their strategies on communicating biodiversity science to local communities. Dr. Meg Burke shared her experiences and strategies on keeping the communities engaged by providing educational outreach, marine camps, and providing educational opportunities to other schools. They pointed out that through investing in the communities that will make lasting benefits in the conservation of the VIP.

To know more about the California Academy of Sciences and their work, please go to the link: http://www.calacademy.org/