Rotterdam, The Netherlands – Last May 10-13, 2016, the OML Center presented its initial findings of a five-country study in Southeast Asia that hopes to develop a framework linking adaptation, DRR and loss and damage.  Aimed at addressing the challenge of assessments in the region due to varying procedures, the study was presented at the  Adaptation Futures 2016 Conference in Netherlands, the biggest global climate conference organized after the Paris Agreement to date, with over 1600 registered participants from more than 100 countries.

Loss and damage (L&D) assessments present a tremendous challenge to governments and policymakers not only because of varying methods and procedures, but also because disasters transcend national boundaries.  As revealed by the study, this lack of clear and consistent guidelines or standards for L&D assessment often lead to inaccurate estimations, further aggravated by other issues such as low availability of reliable data, and low priority of collection of non-economic L&D data.  Initial recommendations to address these challenges were also shared and presented during the Science Session on Disaster Risk Reduction by the Center’s Research and Publications Manager, Perlyn Pulhin. Entitled “Assessing the Linkages between Climate Change Adaptation (CCA), Disaster Risk Reduction (DRR), and Loss and Damage (L&D): Case Studies in the Low-Lying Coastal Cities of Cambodia, Indonesia, Philippines, Thailand and Vietnam,” this study is funded by a grant from Asia-Pacific Network for Global Change Research (APN).

Other findings of the study were also presented in another Science Session, themed Institutions and Governance, by OML Center Researcher Ana Veronica Gabriel. The presentation, entitled “Development Implications of Assessing Loss and Damage in the Philippines,” took on a more local perspective as it focused on the Philippine case. 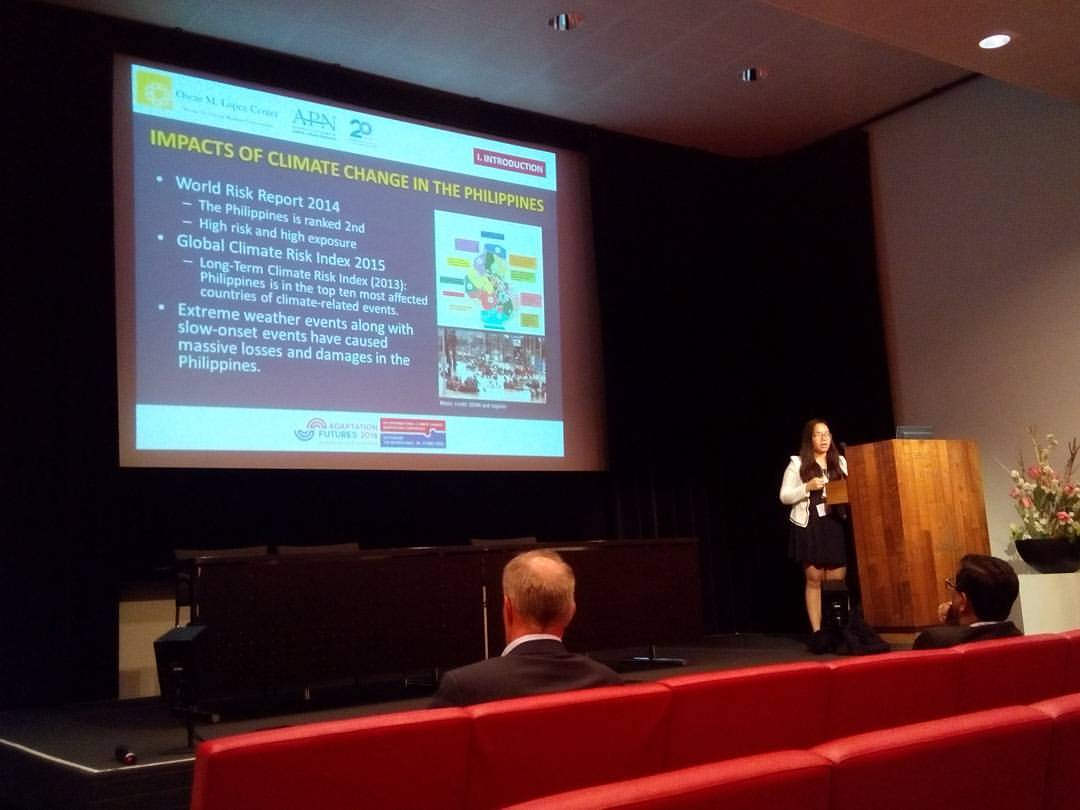 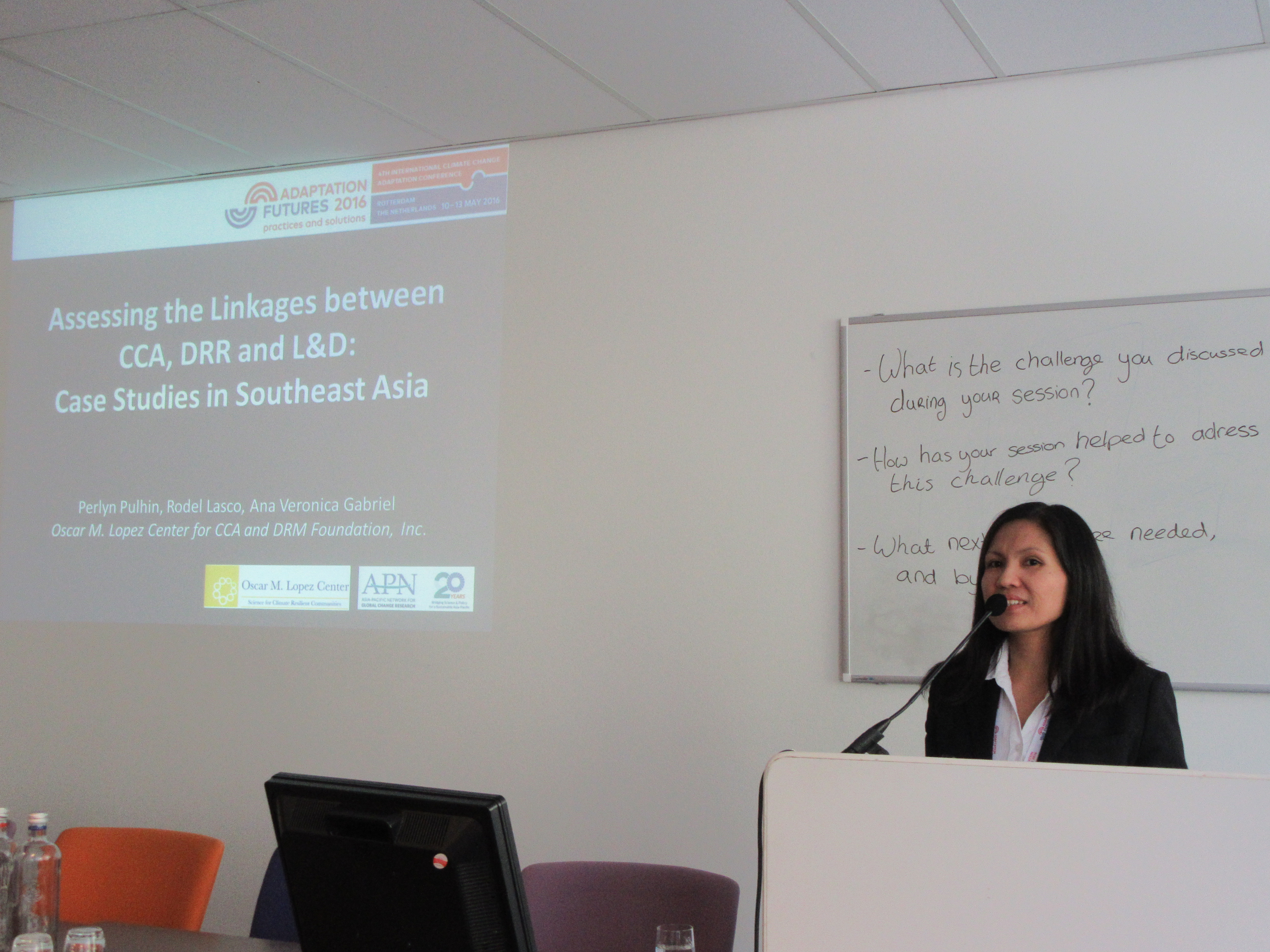 Adaptation Futures is the biennial conference of the Global Programme of Research on Climate Change Vulnerability, Impacts and Adaptation (PROVIA). It aims to move climate change adaptation forward by promoting solutions across sectors, borders and communities. 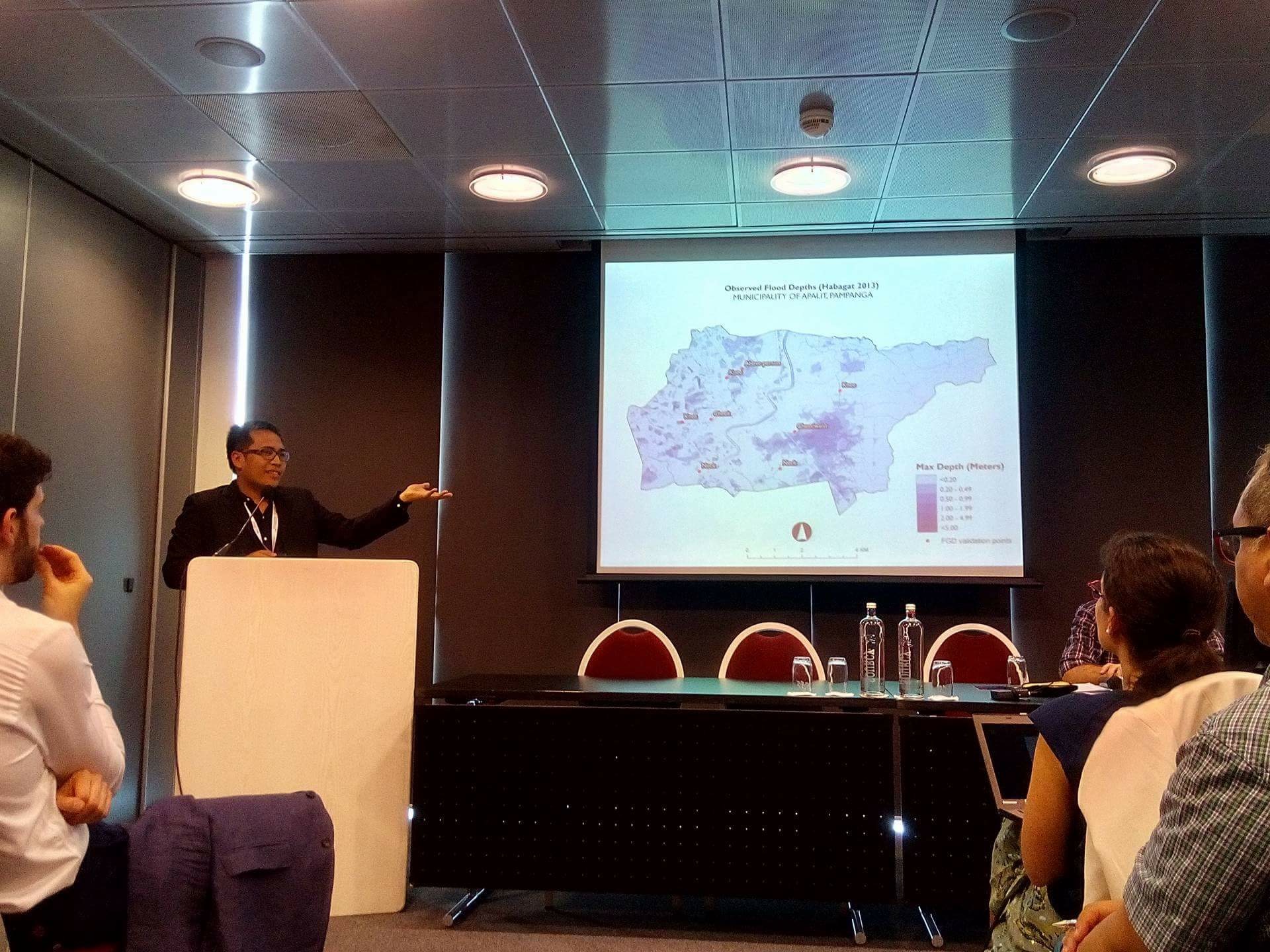 The fourth conference by PROVIA and co-hosted by the European Commission and the Government of the Netherlands, this year’s theme was on adaptation practices and solutions. As such, the Center also presented another study on “Lidar and rice agriculture: Flood modelling and farmer participation for adaptation,” which introduced the use of fine scale flood inundation modelling to cultivation areas in a rice-producing municipality of the Philippines. With the use of LIDAR-based digital elevation model (DEM), river discharge and rainfall data to generate flood inundation maps using LISFLOOD-FP, the method introduced in this study could facilitate effective rice cultivation practices in flood-prone areas.

To know more about these projects and other initiatives to achieve climate disaster resilience of nations and communities through science-based climate adaptation measures, please contact [email protected] or [email protected].