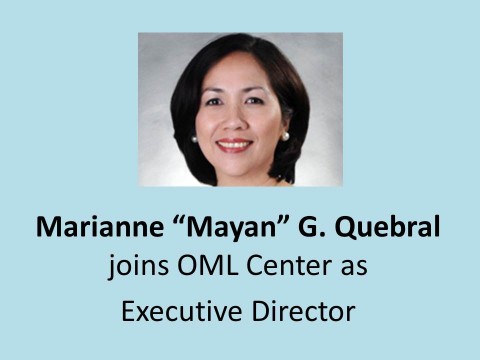 Marianne “Mayan” G. Quebral joins Oscar M. Lopez Center as Executive Director to work closely with its Scientific Director, Dr. Rodel Lasco.  Prior to this appointment, Mayan served as Vice President for Institutional Advancement of the Asian Institute of Management where she was responsible for developing support among AIM’s various stakeholders. Under her leadership, AIM raised over 340 Million pesos in over two years and increased alumni giving by 700%.

A pioneer in fund raising and trained at The Fund Raising School in Indiana, U.S.A., Mayan managed the largest non-profit direct mail campaign in the Philippines with over one million letters sent annually, raising more than 85 million pesos for UNICEF in less than four years. Mayan initiated the first survey of the nature of gift-giving attitudes in the Philippines and has authored The Fund Raiser’s Guide to Fund Raising and Fund Raising 101. Mayan travels extensively around Asia teaching non-profit organizations the principles and success seeds of fund raising. Mayan co-founded Venture for Fund Raising in 1999 as a non-profit that is dedicated to teaching the joy of giving.  Venture for Fund Raising worked with over 1,000 organizations in 24 countries.

Mayan served as Trustee of the Ramon Magsaysay Awards Foundation, De la Salle University Health Science Institute and De La Salle University Dasmariñas.  Today, Mayan serves as Trustee of Venture for Fund Raising, Children’s Hour, Let’s Save the Brain Foundation and a member of the Advisory Council of the Asian Institute of Management Team Energy Center for Bridging Leadership. Mayan is an alumnus of the University of the Philippines and the Asian Institute of Management.