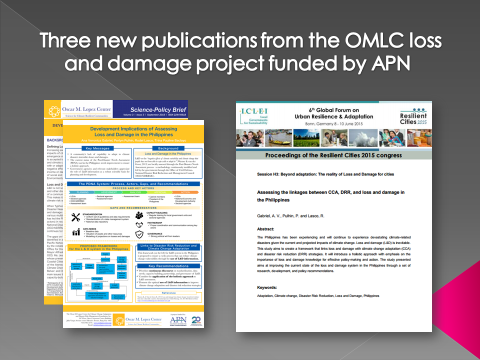 The Asia Pacific Network for Global Change Research (APN) – funded project of OML Center entitled “Assessing the linkages between climate change adaptation (CCA), disaster risk reduction (DRR), and Loss and Damage (L&D): Case studies in the low-lying coastal cities of Cambodia, Indonesia, Philippines, Thailand and Vietnam” has released a poster and a Science-Policy Brief entitled “Development Implications of Assessing Loss and Damage in the Philippines.” This highlights the state of loss and damage assessment system in the Philippines – its process, actors, and gaps. It proposes a loss and damage framework for the Philippines and provides recommendations for the improvement of the system. Both publications were presented at Asia-Pacific Economic Cooperation (APEC)’s Senior Disaster Management Officials Forum at Diversion21 Hotel, Iloilo City on 22-23 September 2015 and at the 4th National Climate Conference at Hotel Jen, Pasay City on 23 September 2015.

Meanwhile, an academic paper on this study entitled “Assessing the linkages between CCA, DRR, and loss and damage in the Philippines” is one of the only two papers that were published by International Council for Local Environmental Initiatives (ICLEI) in the Resilient Cities 2015 Congress online proceedings. The post conference proceedings being published by ICLEI annually consist of academic papers written by the speakers that were presented during the Resilient Cities Congress.