PhilCCA Sectoral Snapshot: What we know about the State of the Philippine Forest

Advisory: OML Center is on Work from Home

PhilCCA Sectoral Snapshot: What we know about the State of the Philippine Forest 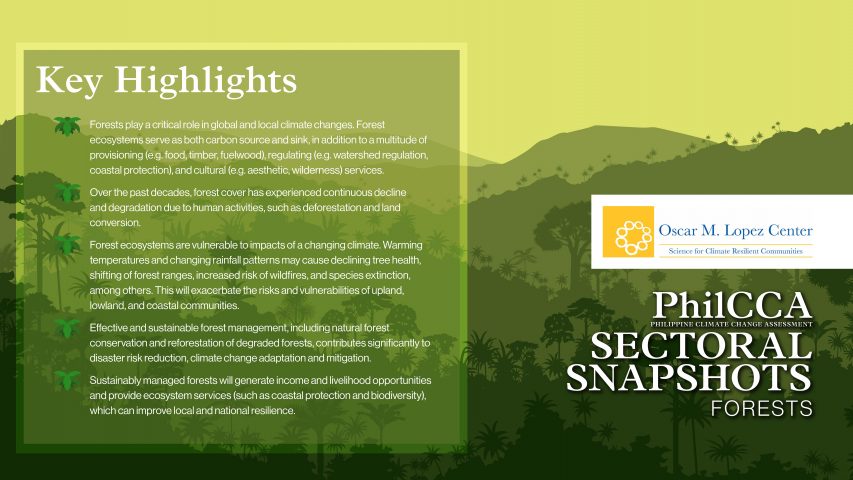 Forests play a crucial role in our survival. It is home to thousands of plant and animal species, and a source of food and water as well as various resources such as timber, fuel, and paper, among others. Forests also help regulate temperature. But despite its undeniable importance, forest cover continues to decline globally.

In the Philippines, data shows that forest cover decreased, dwindling to 6.8 million hectares in 2010 from the 21 million hectares back in the early 1900s. This significant decline does not bode well for all that depend on it, including us. Deforestation results in a multitude of effects, among them, biodiversity loss, flooding, soil erosion, and changes in temperature. And as the planet continuously warms, the already degraded condition of forests will be aggravated, further impacting their ability to provide life-sustaining services.

To underscore the vulnerabilities of the Philippine forest sector to the climate crisis, the OML Center has produced the Philippine Climate Change Assessment (PhilCCA) Sectoral Snapshot on Forests. The first of a series, the content of the sectoral snapshot is derived from the findings of the PhilCCA working group reports produced by the Center, in partnership  with the Climate Change Commission (CCC), from 2016 to 2018. The sectoral snapshot summarizes the scientific results and findings in the working groups, including key research needs and recommendations, and presents them in a more visual manner.

Patterned after the Intergovernmental Panel on Climate Change (IPCC) Assessment Reports, the PhilCCA synthesizes the state of scientific knowledge on climate change in the Philippines, provides an assessment of impacts, and identifies gaps in scientific literature. The working group reports from the first cycle focus on (1) the physical science basis, (2) impacts, adaptation, and vulnerability, and (3) mitigation of climate change” in 2018. The OML Center will begin work on the second cycle in 2021.

The Center developed the sectoral snapshot on Forests with the assistance of National Academician Dr. Rex Cruz and Ms. Regine Joy Javier.

Sectoral Snapshots for Human Health, Freshwater Resources and Fisheries, and Coastal Systems and Low Lying Areas are currently being developed and will be available soon.

Visit the OML Center’s PhilCCA page to download a copy of the PhilCCA Sectoral Snapshot on Forests and copies of the working group reports.