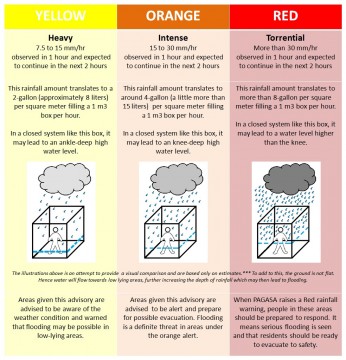 Now that the rainy season is officially here, there are some basic things about rain that you need to know so that you’ll be prepared whenever the rain pours.

Where the rain usually falls during the rainy season

The Philippines has four distinct climate types based on monthly averaged rainfall, and which correspond to four general areas. Type 1 Climate, which occurs mainly in the western part of Luzon and Visayas, including Metro Manila, has two pronounced seasons: dry, from November to April, and wet from May to October. During its wet season, warm moist air from the West Philippine Sea (South China Sea) fuels thunderstorms in the area.

In Type 4 climate areas (east coast of Luzon), moist air from the Pacific Ocean falls during the same wet period of Type 1 climate (also known as Northeast monsoon months – November to February), but is depleted/dried out by the time it reaches Type 1 climate areas. Hence, what is meant by “rainy season” is the rainy season of areas under Type 1 Climate.*

Below is the monthly averaged rainfall over the country showing high amounts of rainfall at the western coast of Luzon and Visayas from May to October**.

Note: If this GIF image is not showing properly, you can view it HERE.
How the dreaded Southwest Monsoon (Habagat) and tropical cyclones (TCs) make things worse

A monsoon is a consistent wind pattern generated by a large weather system that lasts for a period of months and affects large areas. There are two monsoon seasons in the country: Southwest monsoon (habagat) and Northeast monsoon (amihan).

Habagat usually means wet conditions in the western sections of the country from June to September. Because of this, Habagat brings significant amount of rainfall  during the rainy season that triggers flooding and landslides.

Sometimes, Habagat is further enhanced by the presence of tropical cyclones (TCs) within or even outside the Philippine Area of Responsibility (PAR).

An enhanced southwest monsoon happens when a TC turn towards the southwest islands of Japan. This usually produces intense rainfall, causing flooding across the entire Western seaboard of the Philippines, more so over Western Visayas, Palawan, Mindoro, and Western Luzon including Metro Manila. Remember the flooding caused by Habagat in 2012 and 2013? Those were among the most notable enhanced southwest monsoon activities in recent history. Habagat 2012 was caused by Typhoon Haikui in southeast China and during Habagat 2013, Tropical Storm Maring was nearly stagnant somewhere around northeast of Batanes, enhancing the southwest monsoon.

As you can see, southwest monsoons and tropical cyclones do not make for good company during the rainy season.

The rain bands and thunderstorm activity associated with a TC, regardless of its wind intensity, are often heavy and accumulates.  When this happens, TCs, regardless of intensity, can do damage through intense rainfall as the TC passes over a certain area, potentially resulting in floods, landslides and mudslides.

So do not belittle the rain brought by weaker intensity TCs – tropical depressions and tropical storms. There are other factors that lead to intense flooding brought by tropical cyclones i.e. the presence of mountains near the coast just like what happened during Tropical Storm Ondoy (Ketsana) in 2009 and Typhoon Pablo (Bopha) in 2012.

PAGASA releases color-coded (yellow, orange and red) rainfall advisories which mean there is observed rainfall volume that will likely continue for the next 2 hours in a certain area. So imagine yourself in an enclosed box with length = 1 meter, width = 1 meter and height = 1 meter***. Exactly what does this mean?

Note: You may download a higher resolution image from HERE.

Stay tuned for our next advisories and let us know what other things you would like to know about the weather and climate by responding to this e-mail. Or visit our website at www.omlopezcenter.org and post your comments and suggestions.

Resilience starts with knowledge and preparedness. So be aware, be prepared. And choose resilience.
RELATED: Here comes the rain again; Through the rain
Sources: *DOST-PAGASA;**WorldClim; *** Project NOAH