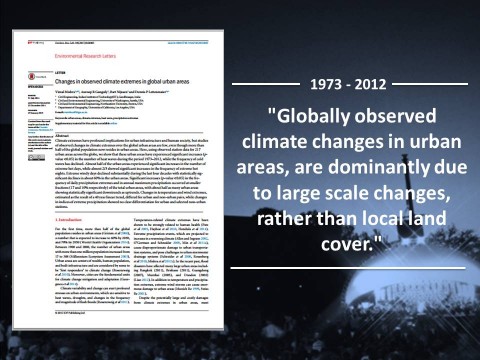 Climate extremes have profound implications for urban infrastructure and human society, but studies of observed changes in climate extremes over the global urban areas are few, even though more than half of the global population now resides in urban areas. Here, using observed station data for 217 urban areas across the globe, we show that these urban areas have experienced significant increases (pvalue <0.05) in the number of heat waves during the period 1973–2012, while the frequency of cold waves has declined. Almost half of the urban areas experienced significant increases in the number of extreme hot days, while almost 2/3 showed significant increases in the frequency of extreme hot nights. Extreme windy days declined substantially during the last four decades with statistically significant declines in about 60% in the urban areas. Significant increases (p-value <0.05) in the frequency of daily precipitation extremes and in annual maximum precipitation occurred at smaller fractions (17 and 10% respectively) of the total urban areas, with about half as many urban areas showing statistically significant downtrends as uptrends. Changes in temperature and wind extremes, estimated as the result of a 40 year linear trend, differed for urban and non-urban pairs, while changes in indices of extreme precipitation showed no clear differentiation for urban and selected non-urban stations.

Read more through this link.