Spatial Analysis of Vulnerability, Exposure, and Risk of Flooding in Pila, Laguna

Spatial Analysis of Vulnerability, Exposure, and Risk of Flooding in Pila, Laguna

The Spatial Analysis of Vulnerability, Exposure, and Risk (SAVER) project is a study that assesses five barangays in Pila, Laguna and their vulnerabilities to flooding due to the backflow of Laguna Lake. The project concentrates on how Light Detection and Ranging (LiDAR) and Geographic Information System (GIS) technology for rice agriculture could be used in assessing and reducing vulnerability.

The project is divided into two components: Vulnerability Assessment and Flood Modeling. The Vulnerability Assessment, with Mr. Edwin Abucay as the main research fellow, was conducted through household surveys, focus groups discussions, and preliminary presentations to LGUs to collect data on social vulnerability. For the Flood Modeling component headed by Engr. Louie Fabila, secondary data and baseline measurements were gathered for the creation of water level indicators as early warning system for flooding in the lakeside barangays, as well as for the construction of the actual flood model. 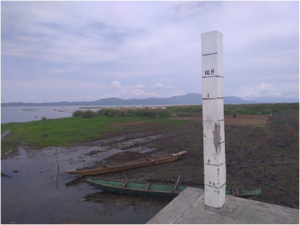 One of the three water markers of the SAVER project located near the coastline of Brgy. Pinagbayanan, Pila, Laguna. The levels imprinted on the water marker translates to the rise of water once it enters the vicinity of its monitored barangay.

Currently, the tools are still being monitored to ensure that they provide accurate readings. According to Pila’s Municipal Disaster Risk Reduction Management Officer (MDRRMO) Mr. Jerome Carillo, the project caught the attention of other local municipalities due to its simple design and impact on the targeted communities. However, there still remains the challenge of gaining the public’s trust, especially for the majority of its stakeholders.

The project study commenced on October 26, 2015 and concluded in the latter part of 2017. After the project has gone through its full assessment, the findings will create an opportunity for the design to be modified to suit the needs of other communities experiencing similar dilemmas.