The Business of Resilience: Opportunities for private actors in the Philippine rice and transport sectors

As our Chairman Emeritus turns 88, we launch the Oscar M. Lopez Legacy Lectures

The Business of Resilience: Opportunities for private actors in the Philippine rice and transport sectors 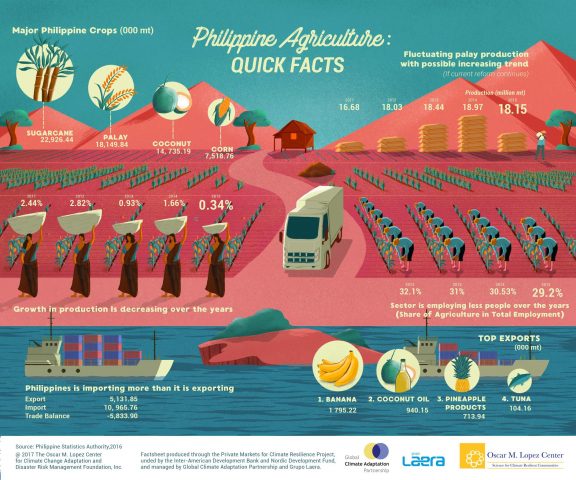 For the past three years, the Philippines has remained in the top 5 of the Germanwatch Global Climate Risk Index (2015-2017) of countries most affected by climate change. Significant climate trends observed include an increase of 0.68°C in mean temperature in the country from 1951-2015 (Oscar M. Lopez Center [OML Center] and Philippine Atmospheric, Geophysical and Astronomical Services Administration [PAGASA], 2016); extremes such as the frequency of hot days and warm nights (Cinco et al 2014); and some evidence of increasing number of extreme tropical cyclones (above 150kph) (Cinco et al., 2016).

The role of the climate in the functioning of Philippine sectors, such as agriculture and transport, cannot be overemphasized. Some assessments indicate that climate variability and change will have negative effects on the agriculture sector (Bordey et al., 2013; Tolentino & Landicho, 2013; IFPRI, 2015). Rice crop yields will decrease generally with even minimal increases in temperature (Peng et al., 2004), and such decrease has been observed to vary in the country’s three major islands (Thomas, Pradesha, and Perez, 2015). Every year, an average of 20 tropical cyclones enter the Philippines. Five to nine of these tropical cyclones are often destructive, causing damage to infrastructure and disruptions to transportation services (WB, 2013; USAID, 2014). With rice as the staple food of about 80% of Filipinos, and an archipelago of 7,641 islands that are connected by a combined network of roads and ports, the Philippines must continuously find ways to become more resilient.

Build, Build, Build: Can a strategy for economic growth be climate resilient too?

Efficient and modern infrastructure has often been identified as an indicator for socio-economic growth and global competitiveness. Archipelagic in nature, such infrastructure is even more important for physical integration. It has been 30 years since the government invested more than the equivalent of three percent of its GDP in infrastructure. With the current administration, its vision of a “golden age of infrastructure” is translated into the Build, Build, Build Program of 70 ambitious projects that range from the construction and improvements of roads, rail systems and airports; flood control projects including dams; and transport terminals and bus rapid transit systems (Department of Finance, 2017).

In total, an estimated PHP 8-9 trillion (USD 160 billion) is the targeted spending levels for this program. With such massive funding requirement, the role of the private sector becomes critical not only in being a source of investment but also a partner in climate resilient development.

Demand for climate resilience is a market waiting to be born

With the market potential for private sector investment in transport infrastructure pegged at 10-15% of the total target spending, the private sector would do well to integrate climate resilience into their business models and operations. Unfortunately, this is slow in coming. It has been observed that “private sector efforts at climate change mitigation and adaptation are not widely understood nor seen as good business practice” (Mendoza, 2014). In the corporate sector, climate change (initiative) is “perceived to be either irrelevant or at best an extension of their Corporate Social Responsibility (CSR)” (IFC, 2010). In simpler terms, the pervading mindset in infrastructure development is that climate-proofing infrastructure is more expensive, ergo costlier. There is a need to shift this thinking of “cost” to “long-term investment” where a climate resilient outcome is the return on that investment.

Many obstacles need to be addressed, beginning with policy reforms that not only require climate resilient designs or the use of climate resilient materials, but also reward or incentivize such risk-mitigating or adaptive efforts. Often, private sector decision-makers point to the policy on preference for “lowest bids/bidders” as a key deterrent to developing more resilient infrastructure, which naturally cost more than those that do not factor in climate variability and change. The transportation sector in the Philippines is largely government-driven, thus policies drive decisions and actions across the value chain.

In addition to building codes and procurement laws, availability of financing and/or risk insurance is badly needed. Although the Philippine banking sector has become increasingly aware of climate change impacts on business and financing, the most common and growing climate finance product is green finance – funding that targets projects that reduce greenhouse gases (GHGs) such as using renewable energy, increasing energy efficiency, or shifting to cleaner production and operations (greening the supply chain). This is more evident in the agriculture sector: although there are laws in place that require banks to allocate 25% of its loanable funds to agriculture and fisheries in general, of which at least 10% shall be loaned to agrarian reform beneficiaries, banks would rather pay fines than offer loans to farmers, as this is considered financially wiser compared to the potential risks of lending to agriculture.

Private actors can take the lead

Although the government has much to clarify in terms of how the private sector can be engaged more meaningfully in efforts to achieve economic growth hand-in-hand with sustainable development, the private sector need not wait. It has demonstrated in the past that it can propel change, even in those instances when public leadership is most needed and desired. And it has done so in the past in areas most familiar – business, where markets are created even when demand is not known to exist. After all, the goal of climate resilience and nation building is everyone’s business.