The Human Cost of Natural Disasters 2015: A Global Perspective

The Human Cost of Natural Disasters 2015: A Global Perspective 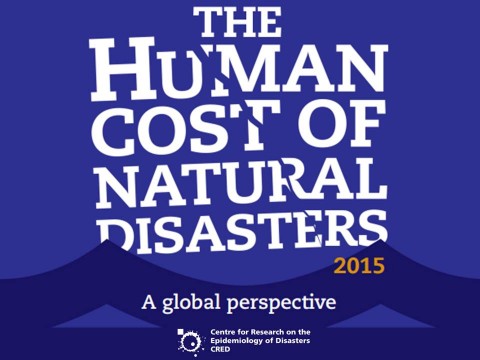 The frequency of geophysical disasters (earthquakes, tsunamis, volcanic eruptions and mass movements) remained broadly constant throughout this period, but a sustained rise in climate-related events (mainly floods and storms) pushed total occurrences significantly higher. Since 2000, EM-DAT recorded an average of 341 climate-related disasters per annum, up 44% from the 1994-2000 average and well over twice the level in 1980-1989.

From a disasters analysis point of view, population growth and patterns of economic development are more important than climate change or cyclical variations in weather when explaining this upward trend. Today, not only are more people in harm’s way than there were 50 years ago, but building in flood plains, earthquakes zones and other high-risk areas has increased the likelihood that a routine natural hazard will become a major catastrophe.

EM-DAT data show that flooding caused the majority of disasters between 1994 and 2013, accounting for 43% of all recorded events and affecting nearly 2.5 billion people. Storms were the second most frequent type of disaster, killing more than 244,000 people and costing US$936 billion in recorded damage. This makes storms the most expensive type of disaster during the past two decades and the second most costly in terms of lives lost.

Earthquakes (including tsunamis) killed more people than all other types of disaster put together, claiming nearly 750,000 lives between 1994 and 2013. Tsunamis were the most deadly sub-type of earthquake, with an average of 79 deaths for every 1,000 people affected, compared to four deaths per 1,000 for ground movements. This makes tsunamis almost twenty times more deadly than ground movements.

Drought affected more than one billion people between 1994 and 2013, or 25% of the global total. This is despite the fact that droughts accounted for just 5% of disaster events in this period. Some 41% of drought disasters were in Africa, indicating that lower-income countries are still being overwhelmed by drought despite effective early warnings being in place.

In absolute numbers, the USA and China recorded the most disasters between 1994 and 2013, due mainly to their size, varied landmasses and high population densities. Among the continents, Asia bore the brunt of disasters, with 3.3 billion people affected in China and India alone. If data are standardized, however, to reflect the numbers of people affected per 100,000 head of population, then Eritrea and Mongolia were the worst-affected countries in the world. Haiti suffered the largest number of people killed both in absolute terms and relative to the size of its population due to the terrible toll of the 2010 earthquake.

While disasters have become more frequent during the past 20 years, the average number of people affected has fallen from one in 23 in 1994-2003 to one in 39 during 2004-2013. This is partly explained by population growth, but the numbers affected have also declined in absolute terms. Death rates, on the other hand, increased over the same period, reaching an average of more than 99,700 deaths per year between 2004 and 2013. This partly reflects the huge loss of life in three megadisasters (the 2004 Asian tsunami, Cyclone Nargis in 2008 and the 2010 Haitian earthquake).  However, the trend remains upward even when these three events are excluded from the statistics.