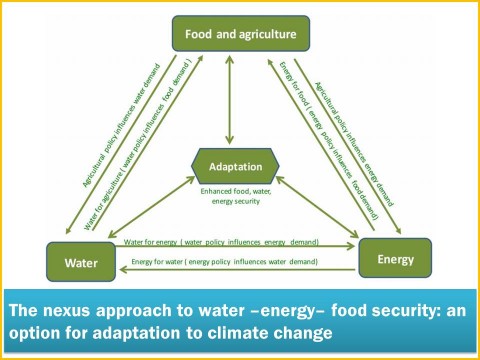 Developing countries face a difficult challenge in meeting the growing demands for food, water, and energy, which is further compounded by climate change. Effective adaptation to change requires the efficient use of land, water, energy, and other vital resources, and coordinated efforts to minimize trade-offs and maximize synergies. However, as in many developing countries, the policy process in South Asia generally follows a sectoral approach that does not take into account the interconnections and interdependence among the three sectors. Although the concept of a water–energy–food nexus is gaining currency, and adaptation to climate change has become an urgent need, little effort has been made so far to understand the linkages between the nexus perspective and adaptation to climate change. Using the Hindu Kush Himalayan region as an example, this article seeks to increase understanding of the interlinkages in the water, energy, and food nexus, explains why it is important to consider this nexus in the context of adaptation responses, and argues that focusing on trade-offs and synergies using a nexus approach could facilitate greater climate change adaptation and help ensure food, water, and energy security by enhancing resource use efficiency and encouraging greater policy coherence. It concludes that a nexus-based adaption approach – which integrates a nexus perspective into climate change adaptation plans and an adaptation perspective into development plans – is crucial for effective adaptation. The article provides a conceptual framework for considering the nexus approach in relation to climate change adaptation, discusses the potential synergies, trade-offs, and offers a broader framework for making adaptation responses more effective.

This article draws attention to the importance of the interlinkages in the water, energy, and food nexus, and the implications for sustainable development and adaptation. The potential synergies and complementarities among the sectors should be used to guide formulation of effective adaptation options. The issues highlight the need for a shift in policy approaches from a sectoral focus, which can result in competing and counterproductive actions, to an integrated approach with policy coherence among the sectors that uses knowledge of the interlinkages to maximize gain, optimize trade-offs, and avoid negative impacts.