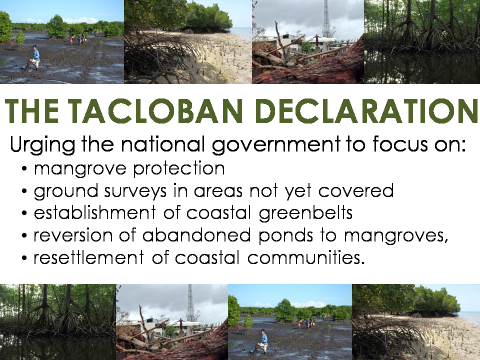 “In the wake of Supertyphoon Yolanda, the Philippine government is planning to allocate PhP1 billion for mangrove and beach forest rehabilitation. However, ground assessments in Eastern Samar and Leyte showed the mangroves to be recovering from minimal to partial damage. Or they sustained no damage at all; only a few mangrove patches were totally devastated. These findings were shared during the Post-Yolanda Workshop: Mapping Yolanda’s impact on Philippine mangroves: impacts and recovery held in U.P. Diliman  last 21-22 March 2014 with attendees from the scientific and NGO communities based in ewMetro Manila.

Hence the need to bring these results to local stakeholders in Region 8 through a second conference-workshop held 13-14 May 2014 at U.P. Tacloban.  At the end of the 2nd meeting, more than 100 participants mostly from local government units and state universities/colleges, local NGOs and also national government agencies, issued the Tacloban Declaration (attached).  Echoing the earlier Call to Action from the March 2014 workshop, the document urges the national government to focus efforts and resources on mangrove protection, ground surveys (to validate the need for planting) in areas not yet covered, establishment of coastal greenbelts, reversion of abandoned ponds to mangroves, and resettlement of coastal communities.”